Animate GuardianSpell, Minion, Physical
Level: (1-20)
Cost: (11-20) Mana
Cast Time: 0.60 secRequires Level 28Animates a melee weapon or armour, attaching it to an invisible Guardian that fights by your side. Animating multiple items attaches them to the same Guardian. You cannot animate unidentified items. Cannot be used by Traps or Mines.Per 1% Quality:1Superior2Anomalous3DivergentMinions have 2% increased Movement SpeedMinions have 3% increased Area of Effect2% increased Minion Maximum LifeCan use Items requiring up to Level (33-100)
Minions' Attacks deal (22-56) to (34-84) additional Physical Damage
(0-76)% increased Minion Maximum Life
Minions deal (0-76)% increased Physical Damage with Melee AttacksPlace into an item socket of the right colour to gain this skill. Right click to remove from a socket. 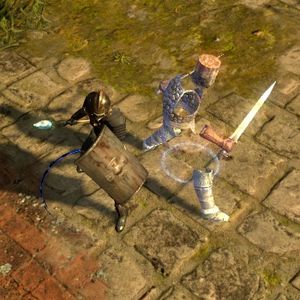 Animate Guardian is a spell, animating weapons and armour on the ground to form an allied minion.

Using this skill on an identified item on the ground creates an Animated Guardian that moves and attacks similar to a zombie. Similar to Spectres and unlike other minions, a Guardian stays with you even after logging off and on. If you unequip the skill gem, the Guardian disappears until you equip the gem again, at which point the same Guardian (retaining all its equipment) reappears after casting the spell again. This also holds true when swapping a different AG gem in. Socketing the gem in a weapon or shield slot allows you to recall the Guardian at will by switching weapon sets (default hotkey: X).

You can only have one Guardian at a time. It can be equipped with a helmet, body armour, pair of gloves, pair of boots, a shield, and melee weapons. Ranged weapons cannot be animated, similar to

Animate WeaponAnimate WeaponDuration, Minion, Spell, Physical
Level: (1-20)
Cost: (4-12) Mana
Cast Time: 0.60 secAnimates a Melee Weapon Item or Lingering Blade to fight by your side. You cannot animate unidentified Weapons. Will not animate weapons with 6 sockets unless specifically targeted. Cannot be used by Traps or Mines.Per 1% Quality:1Superior2Anomalous3Divergent4PhantasmalMinions have 1% increased Movement SpeedMinions have 0.5% chance to Intimidate Enemies for 4 seconds on Hit1% chance to create an additional Animate Weapon copyMinions deal 0 to 5 additional Lightning DamageBase duration is 40 seconds
Can use Items requiring up to Level (9-100)
Minions deal (10-48)% more Damage
Minions have (10-48)% more Attack Speed
Minions' Attacks deal (5-126) to (8-184) additional Physical Damage
Maximum (5-14) Animated Weapons
Animated Lingering Blades deal (1-17) to (2-80) Added Attack Physical DamagePlace into an item socket of the right colour to gain this skill. Right click to remove from a socket.

. Items can be of any rarity, but must be identified and on the ground to be used. Animated items are consumed by the spell and cannot be recovered. Items containing skill gems cannot be animated, so the Guardian cannot use trigger gems.

Items that have modifiers like +x to Maximum life or +x% increased Attack Speed, and even corrupted implicits, apply to the Guardian the same way they apply to player characters; so animating magic or rare equipment can potentially give you a very powerful minion. Unique items can also be used, giving guardians powerful abilities not found elsewhere in the game. Be careful when using valuable items—anything you give to your guardian is gone forever.

The Guardian uses weapons and shields in the same way as player characters, and can dual wield if two one-handed weapons are animated. If you animate an item type that the Guardian is already using (such as a helmet), the new item will overwrite the old one. Equipping an armour piece restores 25% of its life; equipping one-handed weapons or shields will alternate between left and right hand. You cannot equip two shields.

The Guardian does not share your max amount of curses you can apply to enemies, and therefore functions as a player with the default curse limit when applying curses (through corrupted gloves, for example).

Items: The Guardian's items are tied to the character that summoned it, rather than the gem itself. Equipping a level 1 version of the gem will disable any items the Guardian cannot equip, which will be present again once a high enough level gem is equipped.

Items deleted on Death: When a Guardian dies, all its equipment is deleted and cannot be recovered. This makes it very risky to use powerful or valuable items on an Animated Guardian. It is possible to prevent a body armour worn by a Guardian from being deleted upon Guardian death by crafting the Equipped Animated Guardian drops item on death mod onto it. Note once more that equipment will not be lost upon de-spawning, only death.

Necromantic Aegis: While using Necromantic Aegis your Guardian benefits from its own shield as well as the one you have equipped, allowing it to gain the benefit of two shields at once. Some unique shields can be quite powerful when doubled up this way.[1]If your Guardian is equipped with a two-handed weapon, it will not benefit from your shield.

Player versus Player: Animated Guardians killed in PvP areas will not lose their items. This does not apply to

Hall of GrandmastersHall of Grandmasters
Promenade MapMap Level: 72
Map Tier: 5Contains the Immortalised Grandmasters
PvP damage scaling in effectThe grandest and greatest ever to fight,
Divine the champions stand tall.
But match their power, best their might,
And even the immortal may fall.Travel to this Map by using it in a personal Map Device. Maps can only be used once.

, even though the map says "PvP damage scaling in effect". In fact, not only is it possible to lose the Guardian's items here, but death is very likely because of the way PvP damage scaling works. Minor enemies can instantly kill a Guardian with 50000+ life in this map, so it is highly recommended to despawn your Guardian before attempting.

Item-Granted Skills: Animated guardians cannot use skills granted by items. Equipping items like Death's Oath, The Rippling Thoughts, or Bubonic Trail will not allow the Guardian to use their associated triggered skills. Fire Burst granted by

, even though having no "trigger" or "granted" in its modifier discription, won't work either. The Guardian is not your party member, and will not be able to use abilities like the one found on Ambu's Charge. Effects that apply to nearby allies or enemies, like Leer Cast, Victario's Flight, or Dying Breath, will apply as normal.

Life regeneration and percentage increases to life are especially potent on an Animate Guardian because of its huge innate life pool.

Also remember that your Animate Guardian can benefit from Enchantments on Boots and Corruptions.

Animate Guardian can be created from the following recipes: