Additional Effects per 1% Quality:
Minions have 1% increased Movement SpeedMinions have 0.5% chance to Intimidate Enemies for 4 seconds on Hit1% chance to create an additional Animate Weapon copyMinions deal 0 to 5 additional Lightning DamagePlace into an item socket of the right colour to gain this skill. Right click to remove from a socket. 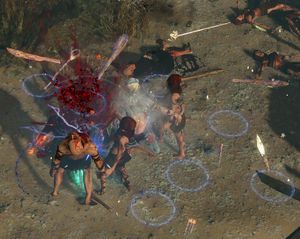 Animate Weapon is a spell that animates a weapon on the ground as a flying allied minion.

Animate Weapon can be used on identified melee weapons lying on the ground. Bows and Wands cannot be animated unless the threshold jewel

Spirit GuardsSpirit Guards
Viridian JewelLimited to: 1
Radius: MediumMinions deal (8-12)% increased Damage
With at least 40 Dexterity in Radius, Animate Weapon can Animate up to 20 Ranged WeaponsLong after the Karui passed through,
the whispers of those who stood their ground
at Lioneye's Watch could be heard amongst the rubble.Place into an allocated Jewel Socket on the Passive Skill Tree. Right click to remove from the Socket.

is being used. Animated weapons are permanently consumed and cannot be recovered. If the "Key Pickup" option is enabled in the UI tab of the Options menu, the "Highlight items and objects" key may be held in order to animate specific weapons. Otherwise, the skill will attempt to animate a random valid weapon within a small area around the player's cursor. Attempting to animate a weapon with a level requirement higher than the maximum listed on the gem will cost mana and perform the cast animation, but will fail to create a minion.

Animated Weapons are minions that are considered to be using the original weapon animated. They are therefore affected by modifiers to minions, as well as support gems for weapons, such as

Additional Effects per 1% Quality:
0.5% increased Elemental Damage with Attack SkillsThis is a Support Gem. It does not grant a bonus to your character, but to skills in sockets connected to it. Place into an item socket connected to a socket containing the Active Skill Gem you wish to augment. Right click to remove from a socket.

, but not affected by any of the player's passive tree for specific weapons.

There are different calculations for weapons summoned from items on the ground and lingering blades from spells.

Casting on a weapon

Weapons inherit the hit damage, attack speed and critical strike chance of the weapon they are summoned from. This includes any direct modifiers to base stats, such as 108% increased Physical Damage, which are factored into the base damage of the minion.

The minion then gains additional Physical damage based on gem level, which is not scaled by weapon local modifiers. The additional damage for Lingering Blades does not apply to animated itemized weapons.

Other weapon-specific stats found on the weapon (such as Attacks with this Weapon Penetrate 12% Elemental Resistances or 25% increased Elemental Damage with Attacks are additive with similar sources of stats for minions.

Note that modifiers to Minions on animated weapons will have no effect on the Animate Weapon minion itself, as Animated Weapon is considered using the weapon, and has no minions of its own. The only exception to this would be when animating

Casting on a Lingering Blade

When animated, Lingering Blades have identical base stats to that of a regular

The same formula is used as when it is cast on a weapon item, except that it also gains additional flat damage on top of the minion's inherent flat damage modifier. This counts as added damage.

Animate Weapon can be created from the following recipes:

The following unique items are related to Animate Weapon: