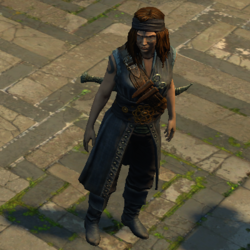 Lilly Roth is an NPC first met in the end of Act 5 at the Cathedral Rooftop after the character is revived by Sin following being defeated by Kitava. She then offered us a lift to Lioneye's Watch in Act 6, beginning our Part two.

She is the granddaughter of Weylam Roth.

She also appeared at the end of Act 9 in the Rotting Core with Weylam Roth after the player defeats the Depraved Trinity, taking the player to Oriath Docks. Once you complete Fallen from Grace, she'll be automatically invited to your hideout. She will also trade Divination Cards there.

Alright, we're safe for the time being. Now let me introduce myself properly.

Lilly Roth. Yeah, I'm one of those Roths. Some call me 'smuggler', others 'pirate', yet I prefer the sound of 'nautical entrepreneur'. Came up with that one meself.

So you come see Lilly if you need something, or even if you just fancy a good chat with a lovely lady.

Weylam Roth… here, let me share something I remember from me granddaddy’s stories.

No sooner had the others turned in fear from the great, white Leviathan, did Weylam load the ballista with his final harpoon. And right then he vowed, to sea and sky, that he and he alone would be the one to finally kill this bastard son of the Brine King.

The ballista fired and the harpoon smote that creature right between the ribs as it made to dive back under the angry sea. Thick clouds of blood bloomed beneath the waves, roses flowering in the black water, and impossible though it seemed, the already shadowed ocean grew darker still…

He used the bones of the great beast to reinforce the hull of his ship, the Black Crest. Old Rot-tooth, he’s a true legend. A real pirate hero. I can only hope, one day, me own stories will reach his ears and make him proud of the granddaughter he had to leave behind.

Yea, I knew Tarkleigh if you catch me drift. He's got no time for his old bunkmates days though. Too gaga-eyed over his lost cause of a fishwife, Nessa.

Time was, Tarkleigh and I would smuggle all 'bout the coast of Oriath. Ah, good days they was. Sweet with rum, nothing but the wind and salt in our faces, freedom in our hearts... and the law on our tails.

But I could tell he were getting ready to make feet for children's stockings with me, so I cut him loose. Not a spark's chance under the ocean the dreaded Lilly Roth's gonna wind up swelling like some drowned carcass.

Still, nice to work with that bugger one more time, just for old time's sake, you know?

That scallywag? I reckon Bestel thinks I be kind of lass who'd bed down with any sort of rascal. Ha, not too far off I guess. He is rather sweet, but not the most comely of figures.

Actually, he kinda reminds me of me Grandfather Weylam Roth. A poet and scoundrel extraordinaire, he be Bestel's but spittle from the mouth of Old 'Rot-tooth' Roth.

"Buss my blind cheeks," said the Sailor to the Doxie. She sports her dairy treats afar, and relishes her moxie. But a fire ship'll sink the broken 'neath the ocean waves. Tip nutmegs a deadly token, sends captains to their graves!"

You have the look of a wayfarer about you. I've a few bits and bobs in the hold that I managed to salvage from Oriath.

Might be you're in the market for a little insurance for the road? The sort of nautical charm or a quaff of tonic be providing.

Go on, have a look-see, and if you be thinking to trade, I reckon we can come to a fair arrangement.

You’ve got the Black Flag from me grandfather’s ship? Ah, the Black Crest were the most formidable ship to ever sail the seas. Yet now it’s a hulk of rotted wood and bone, mouldering away in that forsaken graveyard.

But why is it there? You don’t think that Merveil… Never! I won’t even think it. No Roth would ever fall victim to that tentacle sea-hag. Weylam must be out there somewhere. Yeah, a castaway, that’s it.

For now you’ll be after safe passage to the Brine King’s Reef. And there ain’t no ship going to get you there faster than the Black Crest. So, as the only Roth present and accounted for right now, I hereby give you permission to burn that flag in the Beacon. Might as well see if there’s some truth in that old legend about it resurrecting the wrecks of Roths past… and other less notable vessels.

Maybe when this is all done, I’ll take back the Black Crest for meself and sail out in search of me grandfather. He’s too hardly an old barnacle to kill, so he’ll be out there, somewhere.

Yeah, I know the Brine King. What pirate doesn’t? drowned me fair share of mutineers under the full moon… to keep the old king’s slumber when storms threaten, you see.

If he’s been roused from the depths, it be nothing nut ill tidings for those of us with air in our lungs.

He’ll be getting back to raping and eating us ocean-going folk soon enough. Stealing wombs in which to spawn his slithering offspring.

Aye, that blasphemy is out there somewhere right now, I’d wager. And to think still be folks needing transport from Oriath… more commissions to be had. But a lecherous sea god, now that complicates things.

While you be skulking about, I've managed to do a bit of hunting on me own. Got a hull-full of baubles and trinkets here. Which I managed to... "procure."

Take a look, you might find something particularly naught to help you on yer life's voyage.

The Black crest, she lives again! And me granddaddy... still can't believe Merveil did that to him, the bilesome bitch! At least his spirit roams free once again. Wonder if he'll come and visit his favourite granddaughter one more time...

Anyways, with the Brine King gone, you've done a fine thing for us seafarers. The waters won't no longer pander to the whim of an overgrown bloody crustacean, and damn me if I don't feel a stirring in me loins. It's the ocean, calling... like a lust-starved lover.

But for now, bugger it all, I'll be sticking about Lioneye's Watch until I get me a new ship. Nah, don't feel sorry for me. With me womanly wiles as sharp as they are, I'll be having Tarkleigh help me pass the time, just you see.

You're questioning me? The great sea-mistress Lilly Roth, about how she so happened to find you, failing at drowning, on some godforsaken fleshy piece of land?

Thought it'd be obvious. Grandfather and I, we came to thank you for our little reunion here, you started. Caught wind that you were playing around up here with that dead beast from the locals.

So we followed yer trail, dreaden we'd be findn' yer body bits strewn all over this godforsaken mountain. But lo and behold, what do we get? Our favourite exile, twiddling their thumbs.

Yer lucky ol' Weylam's still got some thaumaturgical prowess in his bones. How the hell did you end up here anyhow?

Well, I suppose you’ll be wanting us to ferry you over to Oriath… take care of that nasty cannibal god, Kitava, once and for all?

Well, we’d be glad to oblige. There be plenty of treasures in ruined Theopolis just sitting there for the taking, I’m sure.

Say the words and we’ll set the sails.

Well, once more, you owe me... for letting ya sail around on me ship. But that's okay, I'm the kinda gal who can play the long game.

Sometime in the future I'll be in need of yer services once more. You can pay me back then...

That Bannon's a real siren if yer ask me. Even after the beating he's taken! Bulging muscles, pretty yella hair... I be willing to bet the barrel of his piece's longer than a ship's mast as well, if you be understanding me drift...

It's a shame in all honesty that he's one of them foolish holy men. Though even that ain't so bad, Lilly Roth loves herself a challenge.

Ol’ Bannon, I'd stake my bets on being a mighty fine demon in the sack. Can't go wrong with a man in uniform!

Only now, he's gone and transformed into that pesky 'God of Light'! I've gotta believe that the man is still in there somewhere, but finding my way into his bedsheets at this stage is proving more difficult than I first thought. Don't seem to be anything that'll budge him from wherever he's hiding, not even an enrapturing roll in the hay with this future pirate queen!

Seems to me that by lettin' ol' Innocence take him over completely, it's like a leech sucking the life right out of him. He's gonna lose out on all them lusty joys of this world, and that ain’t something I'd ever think fondly about.

Not much I can say about that raving monster. While he still breathes, it fares ill for all of us. There ain't no amount of ocean we can put between us and him that Kitava won't see as simply an extra dreg of wine in his cup.

Alright, come on, you've got a job ta do. Lives to save, gods ta kill, better get to it.

Every sell-dwelling lad or lass knows or Tsoatha. They call it a city, but it were more of a slaughterhouse than anything else.

Old Salty himself ruled over the place, treating its citizens as morsels from his own personal pantry. Those who weren't devoured outright were picked to try continue his family line - they became fish wives, like that pretty young Nessa near ended up being.

Well, the Brine King, as you know was forced into a slumber 'neath the ocean, and the city was said to have joined him there as well. A few folk managed to flee from the collapsing coral shards, start new lives for themselves, but I'll be reckoning they left all their valuables behind.

Were a long time ago now, but them Privateers, took the Teardrop, threw it in the Reliquary, then took yers truly, and threw me in those goddamn slave pens. Far as l can tell, they never did work out what the Teardrop were for. Lucky me I suppose.

It were tough, but with the help of a few other undesirables, I managed to find me way out of them pens and into the Reliquary, made an attempt to burgle back what was burgled from me.

Boy, did we sure underestimate the size of them guards the Templars had on the place. Only I managed to escape unscathed. Me accomplices weren't to be so lucky... they ended up in Wraeclast, much like yerself.

I suspect you're about ready for a flagon of ale and a pretty wench or swain, whatever it be that's yer persuasion.

The great exile of Oriath, returns to a Theopolis in chaos and ends the life of a raving cannibal god... now that's a story worth the songs of many an ancient muse.

Well, alls I can rightly say is congratulations my friend. A year ago, I wouldn't have dreamt I’d be someday soon in the company of a killer of gods. My advice, you better get while the getting's good and have yourself a holiday before Oriath or Wraeclast or whoever else has need for your unique services once more.