From Path of Exile Wiki
Jump to navigation Jump to search
This page is about the defensive stat. For equipment classified as armour, see Armour (equipment).
For the basic passive skill, see Armour (passive skill).

Armour is a form of defence that mitigates incoming physical damage from hits. Armour can implicitly appear on equipment much like evasion, energy shield, and ward. Armour rating can be increased by wearing equipment, taking certain passive skills, using skills (e.g.

Molten ShellMolten ShellSpell, AoE, Duration, Fire, Physical, Guard
Level: (1-20)
Cost: (8-12) Mana
Cooldown Time: 4.00 sec
Can Store 1 Use(s)
Soul Gain Prevention: 0 sec
Cast Time: Instant
Radius: 15Applies a buff that adds to your armour, and can take some of the damage from hits for you before being depleted. When the buff expires or is depleted, the skill deals reflected damage to enemies around you based on the total damage that was taken from the buff. Shares a cooldown with other Guard skills.Per 1% Quality:1Superior2Anomalous3Divergent1% increased Skill Effect DurationBuff can take additional Damage equal to 0.25% of your ArmourReflected Damage Penetrates 1% of Enemy Fire ResistanceBase duration is 3 seconds
Buff grants +(50-858) to Armour
75% of Damage from Hits is taken from the Buff before your Life or Energy Shield
Buff can take Damage equal to 20% of your Armour, up to a maximum of 10000
Reflects (100-3000)% of Damage taken from Buff as Fire Damage when Buff expires or is depleted
This Skill's Cooldown does not recover during its effectPlace into an item socket of the right colour to gain this skill. Right click to remove from a socket.

Granite FlaskGranite FlaskLasts 4.00 Seconds
Consumes 30 of 60 Charges on use
+1500 to ArmourRequires Level 27Right click to drink. Can only hold charges while in belt. Refills as you kill monsters.

Basalt FlaskBasalt FlaskLasts 5.00 Seconds
Consumes 40 of 60 Charges on use
20% more ArmourRequires Level 40Taunts nearby Enemies on useRight click to drink. Can only hold charges while in belt. Refills as you kill monsters.

Armour mitigates physical damage from hits, with the exact amount of damage reduction depending on the relative magnitude of the character's armour value and the physical damage of the hit. If the armour value is significantly larger than the damage, most of that damage is prevented. If the armour value is similar to or less than the incoming damage, only a small percentage of that damage will be prevented. For some numeric examples of how damage reduction changes based on armour, see the rule of thumb section later on this page.

As a result armour is more effective against many smaller hits than fewer larger hits, even if both scenarios represent the same total damage in the same amount of time. For a character with extreme investment in armour, what is considered a 'smaller hit' (receiving 75% damage reduction) can be 5000 damage or more. A character with only a minor investment in armour will encounter the limiting case where the damage reduction is very low (less than 5%) and the maximum damage that armour can prevent per hit is only one tenth of the armour value.

Monsters also have armour values. The general amount of armour on monsters will increase as monster level increases, with monster types like stone golems and zombies having relatively high amounts of armour compared to hellions or sea witches. Boss monsters similarly increase in armour rating throughout the campaign. For example, Malachai, The Nightmare has 783 armour, while early map bosses such as Piety the Empyrean can have around 7000 armour depending on map level. Endgame bosses such as The Elder or Sirus, Awakener of Worlds have over 20000 and 32000 armour respectively.

For a step by step calculation of formulas, see Armour/math.

This is the base formula all other formulas are based upon. It is used to calculate the #% additional Physical Damage Reduction when Hit factor, i.e. the percentage by which the physical damage is mitigated.

where A is the defender's armour rating and Draw is the raw physical damage.

To calculate the armour rating you need to mitigate a given amount of Physical Damage at specific ratio, you can use this formula:

You can also calculate the raw physical damage that would have resulted for a given Physical Damage Reduction and Armour rating:

To calculate the net physical damage (i.e. the damage after damage reduction, the following formula can be used:

Another way of looking at it is in terms of absolute physical damage reduction:

The plots below displays how much damage reduction occurs at different armour ratings and raw physical damage. 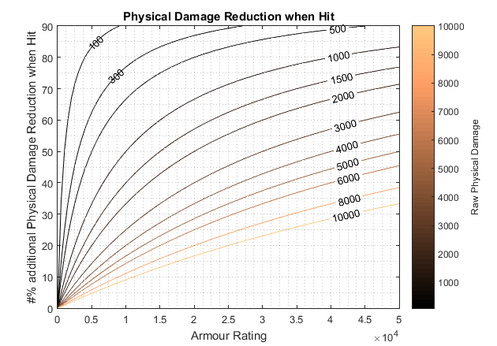 Mitigated Damage as a function of Incoming Damage and Armour Rating. Note that Rounding is usually decided in the monster's favor.

% Mitigated Damage as a function of Incoming Damage and Armour Rating

From the plot below we can further conclude: 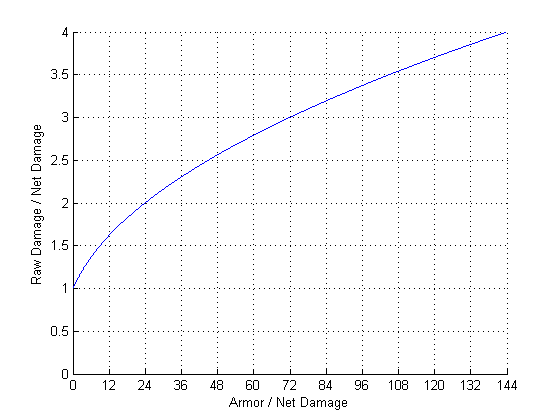 There are currently no support skill gems that have stats related to armour.

There are currently no support skill gems that have quality stats related to armour.

The following items provide some bonuses that scale with Armour rating.

Unique items that can potentially grant upwards of 1,000 Armour rating.

There are passive skills that grant armour bonuses.

These passive skills grant increased armour rating or additional base armour rating. The Iron Reflexes keystone is special in that it converts evasion rating to armour rating. No results found for the given query.

No results found for the given query.

The following cluster jewel-only passives are related to armour: