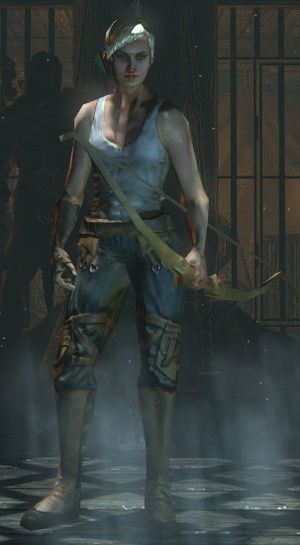 Padding silently through the dark forest, the lithe and stealthy ranger is at home. Long eschewing the company of men, she has turned her affections to the deep and wild wilderness, and she travels alone. Her time out away from the comfortable trappings of civilization has hardened her body and her spirit. It has also granted her the time and necessity to master a wide range of weapons. Despite her prowess on the battlefield, the Ranger is most comfortable hidden from view, felling her opponents from a distance with her mighty long bow. When cornered though, she fights as fiercely as a tigress with sword, dagger, mace, or whatever is at hand.

The Ranger is Path of Exile's pure dexterity class, which befits her slim and graceful appearance. She is agile and fast, darting in and out of combat to deliver vicious critical strikes that often fell her enemies in a single blow. Her natural quickness grants her a profound ability to avoid damage through a high Evasion, and she tends to garb herself in light leathers and cloth. She has tremendous proficiency with ranged weapons, but she is as lethal as any man on the battlefield with a sword.

The equipment associated with the Ranger's dexterity are Caps/Hoods, Leather/Garbs/Tunics, Hide Gloves, Hide Boots, and Bucklers.

In general, a Bow focused Ranger is VERY good at applying damage to enemies both at long and short range, arguably among the best of the classes. However, focusing on a pure Evasion defense is one of the weakest; it has no effect whatsoever on spells, and only MIGHT avoid physical attacks. You will need to carefully pay attention to avoid attacks whenever possible, ideally trying to kill enemies from beyond visual range on the screen (which many of your bow skills can reach).

Rangers can specialise into one of these three Ascendancy classes:

The Ranger is voiced by New Zealand actress, Sophie Hambleton.

"No life can be owned. Not a deer's. Not a rabbit's. And not mine. Every creature has a birth-given right to live however it will. However it can.

My right is to hunt. To feed off the wilderness in the understanding that, one day, will feed off me.

The fat lords of Oriath have no such understanding. They call me 'poacher' and 'thief'. Clap me in irons and haul me like cargo into exile. No matter. I'll make the forests and mountains of Wraeclast my new home. My freedom and my bow... that's all I need."

Achieving Level 3: "The worms will have to wait a bit longer for this meal."

Achieving Level 10: "As the prey grows more fierce, so must the Huntress."

Achieving Level 15: "One rung closer to the top of the food chain."

Achieving Level 20: "Looks like this land and I are coming to an understanding."

Achieving Level 30: "You've given me so much. What can I do for you, Wraeclast?"

Entering The Prison: "There's no justice in a place like this. Only misery."

Entering The Ship Graveyard: "Life and death live side by side. This is a strange land."

Entering The Chamber of Sins: "Luxury and cruelty go hand in hand."

On releasing the darkness: "This shouldn't be happening. Not in the world I know."

Entering The Warehouse Sewers: "Life is nothing without death. That simple truth's been forgotten from time to time."

Entering The Solaris Temple Level 1: "I've never felt further from what I know and love."

Entering The Lunaris Temple Level 2: "Piety...you've so much to answer for."

Entering The Sceptre of God: "Why do we insist on building mountains? Why not just go and climb them?"

Entering The Aqueduct: "Cities are a blight upon nature, and Sarn was the foulest of them all."

Entering The Dried Lake: "A lake drained, a million creatures lost, just so Sarn could keep its privies flowing."

Entering The Mines Level 2: "Feels like something stirring in its sleep."

On freeing Deshret's spirit: "My gift, from one fighting woman to another, Deshret."

Entering The Crystal Veins: "This one deeply troubled mountain."

Entering Kaom's Dream: "This isn't the Karui that I know."

Entering The Belly of the Beast: "So this is what life inside of a nightmare looks like."

Entering The Harvest: "Every crime against nature imaginable."

Having killed Brutus: "I've done for you what I would do for any wounded animal, Brutus."

Having killed Fairgraves: "You were a good man in a bad situation, Fairgraves."

Having killed Kraityn: "The king of rats? A feast for rats now."

Having killed Alira: "I hate to pluck a pretty flower. Even a poisonous one like you."

Having killed Oak: "Do some good for once in your sorry life, bandit. Feed the worms."

Having killed Vaal Oversoul: "Spread the word amongst your kind, nightmare. You're not welcome in my world."

Having killed Piety: "Your death doesn't fix anything, Piety. But at least it won't get any worse."

Having killed Dominus: "Some of us live to regret our mistakes. Some of us don't. Try not to take it personally."

Having killed Voll: "This land won't miss your kind, Voll."

Having killed Kaom: "One less little angry boy for the world to deal with."

Having killed Daresso: "The only love you had Daresso, was for yourself."

Having killed Shavronne: "We destroy so much beauty in our pursuit of 'prettiness'"

Having killed Doedre: "You were your own worse enemy, Doedre."

Having killed Maligaro: "Your kind leave nothing but scars, Maligaro."

Having killed Malachai: "You were going to put to death the world that I love. Do you really think I would let you and your Beast do that, Malachai?"

Piety, to the Ranger (Chamber of Sin): "You again? Well, I'm sure you won't be looking so calm once that monstrosity tears you a new orifice."

Piety, to the Ranger (Crematorium): "Huntress, you are beatific because you answer to no-one. And that's why no-one will miss you.

Gravicius, to the Ranger: "God gave this world to Man, not to you, little girl!"

Dominus, to the Ranger: "It is woman's purpose to tempt and try the will of man."

Occasionally, after killing a rare mob: "I give you to the earth."

Occasionally, after killing a rare mob: "Pruning a branch can save a tree."

Occasionally, after killing a rare mob: "I put you out of your misery."

Occasionally, after killing a rare mob: "Beauty will grow from your remains."

Full inventory: "That would only slow me down."

Using skills in town: "Can't see why I'd want to do that here."

On trying to drop a quest item: "I have a hunch I'll be needing this."

Not enough Strength: "I'll need to toughen up for that one."

Not enough Dexterity: "I need to sharpen the reflexes before I use that."

Not enough Intelligence: "I'm no fool, but this one's got me beat."

Nessa's Introduction: "I've seen you before, back in Oriath! Running like a frightened rabbit from my father and his gamekeepers. Fleet as a fox you were, even with that leg of prize venison over your shoulder. And from what I saw you do to Hillock, you've grown even faster since then. I'm Nessa, and I suppose I should thank you for ridding us of that putrid giant. I hope your speed never fails you, Ranger. It's all that stands between you and death, here in Wraeclast."

Bestel's introduction: A ravishing Ranger, relegated to rot in Wraeclast. That's the first line of the poem I'm writing about you, exile. Easy, girl. You could skewer a bloke with a look like that. The name's Bestel, captain of the good ship 'Merry Gull'. Alas, my Merry Gull is gone. My crew is gone. But my wits remain... after a fashion."

Maramoa's introduction: "You have the walk, the grace, of a woman who knows Death intimately. Men are born with that knowledge. We have to earn it. Yes, there's much that you and I might speak of but we have not the time now."

Kira's introduction: "This land is a wounded animal, its torn flesh infected by Nightmare. Before you put this animal out of its misery, be sure, Ranger, to give thought to those who live on its back."

Tasuni's introduction: "Yours is a lonely existence, Ranger. The journey of the one natural beast left to this land. The corrupted wilderness rejects your love, and the corrupted creatures continue to fall to your rage."

Oyun's introduction: "Although we two were born lands and cultures apart, I recognise a woman in kind. A woman who fights not only for her own survival, but for the survival of the wilderness she calls home. Yet, you are not bound like us, to the thoughts and habits of tradition. That is why you will kill the Beast within the mountain. Lady Dialla has told me this. She has much faith in you, Ranger. The question is... can we Maraketh share in her faith?"

Piety, the Abomination, in the Belly of the Beast: "You see what happens when you hunt dreams, Ranger?"

Piety, the Abomination, after being defeated: "You've just earned yourself some bigger prey, huntress."

Piety, after being restored: "Listen carefully, Ranger, as this is something you will never hear from me again: I was wrong and you were right.

When we shared our 'moment' back in the Lunaris, part of me wishes I'd died at your feet as intended. The little girl within me that shies from darkness, from greatness."

Piety opening the Black Core: "I remember when we first crossed paths in Axiom Prison.

Logic dictated that you, a feral little girl of the wild, were to die under Brutus' bloody fists. You've proven logic wrong, time and again.

Now here you are. Here we are. Defying logic one last time."

Malachai's introduction: "I admire you in this moment, Ranger. You and I will create the most beautiful of Nightmares together. Creation... usually the concern of Nature, isn't it? Not anymore."

Piety's last words: "You... you were born for this. But you've always known that, haven't you. I've strived my whole life to make something better, of the world, of myself. You have simply lived, and the irony is, that's all that either of us ever needed to to. So go, finish the hunt, Ranger. Do what comes so naturally to you."

Responding to Piety: "Piety, you never should have resisted Death. Nature will it, like all else."