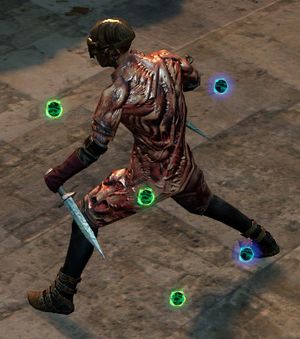 Charges are counters that are represented as glowing orbs around the creature. Charges can also be identified by having a specific silver border around the icon.[1]

There are three types of charge every character can have, each corresponding to a different core attribute:

Other charges in the game that do not have any default effects, but are required for other skills, items, or passives are:

Each type of charge grants different bonuses. Charge bonuses increase proportionally to the number of accumulated charges of that type.

Charges are accumulated by the use of certain skills and equipment, and have a duration of ten seconds by default.[2] This duration can be increased or decreased with specific passive skills and unique items. Gaining a charge resets the duration of all accumulated charges of the same type.

Some map modifiers allow enemies to steal Charges, including alternative charges and other charges.

By default, characters can accumulate a maximum of three charges of each type. This limit can be raised or lowered with certain passive skills and equipment. If the character would gain a charge while already at the limit for that type of charge, no additional charge will be gained; however, the duration of all charges of that type will still be reset.

Maximum number of charges can also be lowered by the following sources:

Certain mods grant +X to Minimum Endurance/Frenzy/Power Charges, causing your character to always have that amount of charges.

Skills and effects that consume charges to activate an effect cannot use these minimum charges. For example, using

Flicker StrikeFlicker StrikeAttack, Melee, Strike, Movement, Duration
Level: (1-20)
Cost: 10 Mana
Cooldown Time: 2.00 sec
Can Store 1 Use(s)
Attack Speed: 120% of base
Attack Damage: (142-210)% of base
Effectiveness of Added Damage: (142-210)%Requires Level 10Teleports the character to a nearby monster and attacks with a melee weapon. If no specific monster is targeted, one is picked at random. Grants a buff that increases movement speed for a duration. The cooldown can be bypassed by expending a Frenzy Charge.Base duration is 3 seconds
10% increased Attack Speed per Frenzy Charge
15% chance to gain a Frenzy Charge on Hit
Buff grants 20% increased Movement Speed

Additional Effects per 1% Quality:
0.25% chance to gain a Frenzy Charge on HitPlace into an item socket of the right colour to gain this skill. Right click to remove from a socket.

with +1 to Minimum Frenzy Charges at 1 Frenzy charge will never use that charge to remove its cooldown.