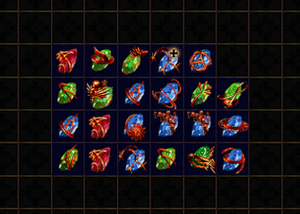 The Vaal civilization may have existed thousands of years ago, but it had its own form of skill gems. Brutally powerful and fueled by the sacrifice of foes...

Vaal skill gems can be looted from vaal side areas, certain strongboxes, certain divination card, and bosses of corrupted maps. It is also possible to create a Vaal skill gem by using a

(or Lapidary Lens) on a corresponding normal skill gem (e.g. using a Vaal Orb on

Spectral ThrowSpectral ThrowAttack, Projectile
Level: (1-20)
Cost: (5-8) Mana
Attack Speed: 110% of base
Attack Damage: (80-125)% of base
Effectiveness of Added Damage: (80-125)%
Projectile Speed: 1000Throws a spectral copy of your melee weapon. It flies out and then returns to you, in a spinning attack that damages enemies in its path.Per 1% Quality:1Superior2Anomalous3Divergent0.5% increased Attack Speed1% increased Projectile Speed0.5% reduced Projectile Speed
Fires an additional ProjectilePlace into an item socket of the right colour to gain this skill. Right click to remove from a socket.

has a chance of turning it into

Vaal Spectral ThrowVaal Spectral ThrowVaal, Attack, Projectile
Level: (1-20)
Souls Per Use: 15
Can Store 1 Use(s)
Soul Gain Prevention: 4 sec
Attack Speed: 110% of base
Attack Damage: (70-110)% of base
Effectiveness of Added Damage: (70-110)%Throws several spectral copies of your melee weapon. They fly out and then return to you, in a spinning attack that damages enemies in their path.Per 1% Quality:1Superior0.5% increased Attack SpeedFires 8 Projectiles in each of two mirrored spirals
Can't be Evaded
CorruptedPlace into an item socket of the right colour to gain this skill. Right click to remove from a socket.

To use a Vaal skill, its gem must first be charged by collecting souls. Souls can be obtained by killing enemies, granting 1 souls per kill. Souls can also be obtained when damaging Rare or Unique enemies (1 or 6 souls, respectively, per 2% life lost with a 1 second cooldown). Each soul gained will charge a random Vaal skill equipped on the character. Souls will never charge a Vaal skill in the character's secondary weapon set. Souls are also tracked per skill, not per gem. In other words, you cannot store multiple charges of the same skill by equipping multiple copies of the Vaal skill gem.

Once a Vaal skill collects a sufficient number of souls, it is charged with one use. The number of souls per use depends on the skill. Some Vaal skill gems can store enough souls for more than one use. Once a gem's maximum soul capacity is reached, it can collect no additional souls until they are spent by using the skill. Once used, the Vaal skill will be unable to gain souls for a few seconds. The length of soul gain prevention time varies between skills, and effects that modify the duration of the skill will also modify the duration of the soul gain prevention time. The soul gain prevention is global, which means you will not be able to gain any souls for any vaal skill at all.

A vaal gem that collected souls in an instance will keep these souls during a gem swap, a drop on the ground or putting it in the inventory afterwards.

Party - All players near monsters killed gain the same number of vaal souls as if they had killed it alone. Therefore characters who do not kill can still gain vaal souls in a party. In a party all kills by a player with Soul Eater will not give vaal souls to the party.

Soul Eater will prevent solo characters from gaining any vaal souls during the buff effect.

Sextants can apply the following modifiers to maps:

Vaal skills cannot be supported with

Ancestral Call SupportAncestral Call SupportSupport, Melee, Attack, Strike
Icon: A
Level: (1-20)
Cost & Reservation Multiplier: 130%Supports melee strike skills, causing them to also strike at extra targets simultaneously. The extra targets must be a minimum distance from the user. If supporting a minion attack skill, the minion's skills will not also strike extra targets. Cannot support triggered skills.Per 1% Quality:1Superior2Anomalous3DivergentSupported Skills deal 0.5% increased Melee DamageSupported Skills have 0.5% increased Area of EffectSupported Skills have +0.2 to Melee Strike RangeSupported Strike Skills target 2 additional nearby Enemies
Supported Skills deal (19-0)% less DamageThis is a Support Gem. It does not grant a bonus to your character, but to skills in sockets connected to it. Place into an item socket connected to a socket containing the Active Skill Gem you wish to augment. Right click to remove from a socket.

Vaal skills themselves can not be activated by trigger effects, but they can be used as a trigger.

Any effects that modify the original skill, such as Helmet Enchantments and Threshold jewels, will also affect the Vaal version of the skill as well.

Even if a Vaal skill has a gem tag that doesn't apply it to the base version, both versions will have that gem tag. For example, a

Vaal Impurity of FireVaal Impurity of FireAura, Vaal, Spell, AoE, Duration, Fire
Level: (1-20)
Cooldown Time: 0.50 sec
Can Store 1 Use(s)
Souls Per Use: 50
Can Store 1 Use(s)
Soul Gain Prevention: 8 sec
Cast Time: InstantRequires Level 24Casts an aura that reduces fire damage taken and provides ignite immunity to you and nearby allies, and makes hits against nearby enemies ignore their fire resistance.Per 1% Quality:1Superior2% increased Area of EffectYou and nearby allies gain 5% additional maximum Fire Resistance
+(14-20) to radius
Base duration is 3 seconds
You and nearby allies are Immune to Ignite
Nearby Enemies' Fire Resistance is Ignored by Hits
Modifiers to Skill Effect Duration also apply to this Skill's Soul Gain Prevention
(0-76)% increased effect of Aura
CorruptedPlace into an item socket of the right colour to gain this skill. Right click to remove from a socket.

Purity of FirePurity of FireAura, Spell, AoE, Fire
Level: (1-20)
Reservation: 35% Mana
Cooldown Time: 1.20 sec
Can Store 1 Use(s)
Cast Time: Instant
Radius: 36Requires Level 24Casts an aura that grants fire resistance to you and your allies.Per 1% Quality:1Superior2Anomalous3Divergent2% increased Area of EffectYou and nearby Allies have 0.25% chance to avoid being IgnitedYour and nearby Allies' Damage Penetrates 0.05% Fire ResistanceYou and nearby allies gain (22-41)% additional Fire Resistance
+(0-19) to radius
You and nearby allies gain (0-4)% additional maximum Fire ResistancePlace into an item socket of the right colour to gain this skill. Right click to remove from a socket.

Gemcutter's PrismGemcutter's PrismStack Size: 20Improves the quality of a gemRight click this item then left click a gem to apply it. The maximum quality is 20%.
Shift click to unstack.

can't be used on corrupted gems, getting quality on vaal gems is substantially harder than it is on a regular gem. Vaal gems must either drop with quality or a normal gem already with quality must have a

used on it and be turned into a corrupted Vaal gem.

Vaal Skills have requirements based on each of the three main attributes, and can be easily identified by the attribute colour.

A list of active skill gems granting vaal skills is displayed below.

The skill Gluttony of Elements, which is obtained by equipping

Blood of CorruptionBlood of Corruption
Amber AmuletRequires Level 20+(20-30) to StrengthGrants Level 10 Gluttony of Elements Skill
Adds 19 to 43 Chaos Damage to Attacks
-(10-5)% to all Elemental Resistances
+(17-29)% to Chaos Resistance
CorruptedIn my dream, a voice spoke to me. It said:
'My reach knows no bounds.
All that is pure is destined to rot.
All that lives is destined to serve.'
- Doryani, Queen's Thaumaturgist

, also counts as a Vaal skill.

The following achievements are related to Vaal skill gems: