Vaal Detonate DeadSpell, AoE, Vaal, Fire
Level: (1-20)
Souls Per Use: 30
Can Store 1 Use(s)
Soul Gain Prevention: 8 sec
Cast Time: 0.60 sec
Critical Strike Chance: 5.00%
Effectiveness of Added Damage: 200%Targets a corpse, and deals spell damage to enemies around the corpse, as well as causing the corpse to explode, dealing fire damage. The explosion is not affected by modifiers to spell damage and cannot be reflected. This will continue to target other corpses in the area, with an increasing delay between each one, until it runs out of corpses or has destroyed 22 corpses.Deals (23-1395) to (33-2092) Fire Damage
Explosion deals base Fire Damage equal to (6-7.9)% of the corpse's Maximum Life
+(0-4) to radius

Additional Effects per 1% Quality:
1% increased Area DamageCorruptedPlace into an item socket of the right colour to gain this skill. Right click to remove from a socket. 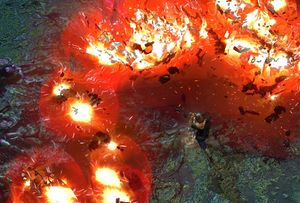 Vaal Detonate Dead is a Vaal spell that explodes a corpse and all other nearby corpses in a chain reaction, dealing fire secondary damage.

Ascendancy interaction: This skill counts as consuming a corpse for the purpose of the Necromancer's Corpse Pact, Essence Glutton, and Plaguebringer ascendancy skills.

Vaal Detonate Dead can be created from the following recipes: