Additional Effects per 1% Quality:
Minions deal 1% increased DamageCorruptedPlace into an item socket of the right colour to gain this skill. Right click to remove from a socket. 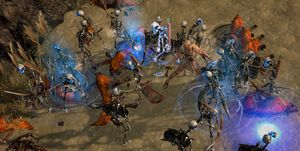 Vaal Summon Skeletons is a vaal spell that summons an army of skeletons, led by a skeleton general.

One of several general variants will be randomly summoned on cast.

This skill works with the passive skills that increase the maximum number of skeletons. But like Summon Skeletons it does not gain an increase in the amount spawned at each use. If one were to cast the ability while it is still in effect its behavior is similar to Summon Skeletons; first it spawns new skeletons up to the cap, then it start replacing the oldest one. When replacing, no consideration is taken to what kind of skeleton is summoned or replaced. Hence it's possible to have two generals at a (short) time. At gem level 20 with all passives and no unique items the chance is 6/(36+6).

Vaal Summon Skeletons can be created from the following recipes:

The skeleton limit can be increased with certain passive skills or items.

The Player can have a maximum of 47 (or more) Skeletons from this skill gem Active at once:

Note, that To Dust (previously named Army of Bones) no longer grants +2 to Maximum number of Skeletons.