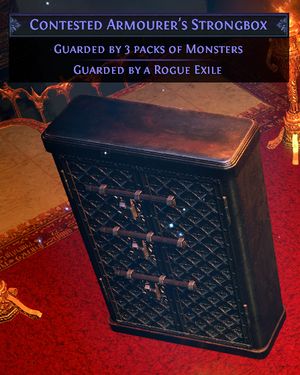 An Armourer's Strongbox containing armour guarded by a rogue exile

Strongboxes are a special type of chest found throughout Wraeclast. When opened, a strongbox will release groups of monsters to surround and attack the character. Only once all of the ambushing monsters are slain will a strongbox relinquish its loot. The monsters released by a strongbox also drop loot and grant experience when killed.[1] Monsters not directly summoned by the strongbox, such as Spitters emerging from Shield Crabs, or raised undead, do not need to be killed to unlock the strongbox.

This encounter is considered Extra Content and has a chance to appear in any map area or most story areas. The specific chance for strongboxes to spawn has never been officially published. This mechanic is also referred to as Ambush.

Strongboxes come in different base types which determine the kinds of items that can normally be obtained from them.[2] Modifiers can further alter the loot contents, such as granting additional rare items or gems.

Monstrous TreasureMonstrous TreasureIn a long lost dream, great foes hide in tiny boxes, but so do great rewards.You will travel to a map where the monsters lie in wait, open the boxes they guard, and slay them all.Right-click to add this prophecy to your character.

Note that Vaal Vessel in vaal side area is not counted as a strongbox, but the tooltip for the unique version, Atziri's Vessel, indicates that it does count as a strongbox.

Vaal Temple MapVaal Temple MapMap Level: 83
Map Tier: 16
Guild Character: >Area contains 10 additional guarded Vaal VesselsVoices. Visions. Violence.
They will haunt these grounds for all of eternity.Travel to this Map by using it in a personal Map Device. Maps can only be used once.

Like items and monsters, strongboxes come in different rarities with various modifiers. A non-normal strongbox inherently has increased item quantity and rarity regardless of other modifiers.[5] It must be identified with a

to reveal its modifiers. It is also possible to craft strongboxes using currency items. Corrupting a strongbox with a

may corrupt some of the loot contents.[6]

Note that modifiers to monsters (such as increased area if effect) also apply to skills used by strongboxes, making things like

List of prefix modifiers that can appear on Strongboxes.

Suffixes can alter the loot contents in distinct ways, such as granting additional items or increasing the number of sockets on equipment.

Like most other unique items, it is possible to craft a unique strongbox using an

on a normal strongbox with the corresponding base type.

There are also unique strongboxes that can only be found at the end of certain unique maps.