The animals in this land are sick. Sick in the body and sick in the mind. I have never seen such a sickness before. Only one thing can be done. We survivors must prepare for the end, and delay its arrival as long as we can.

For the divine creature that corrupted Malachai, see the Beast (lore).
For the divination card, see The Beast.
For the monster type formerly known as "Beast" among gaming community, see Gargantuan. 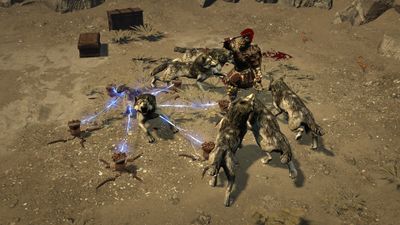 Beasts is a general name for the wildlife in Wraeclast. With the help of Einhar Frey, these beasts can be captured and brought to the Menagerie to be sacrificed for beastcrafting.

When encountering a beast, Einhar will appear to assist you and will throw nets at beasts with low health to capture them. Captured beasts are recorded in the Bestiary.

There are also four Spirit Beasts. These must be hunted by opening a portal to their respective domains through the blood altar. Each of them drops their own unique gear and can be captured in order to craft Aspect Skills onto items.

From Act 2 on, Einhar appears in areas together with some beasts. There will be at least one red beast and roughly between two and five yellow beasts.

The mechanics differ from those in the Bestiary league. Once a beast drops below 50% life, Einhar will appear in the zone to assist in the hunt. He will throw nets at beasts that are low on health to capture them. The beast will be added to the menageries of all players in the current party.

Beasts can also be found in a Beast node in the Azurite Mine. These beast can be killed, but will get added to your Menagerie once defeated.

Beastcrafting is a method of crafting by sacrificing beasts to the blood altar in the Menagerie. Beastcrafting requires four beasts to be sacrificed, with most of them requiring a specific Red Beast and three other beasts. When beastcrafting, the four beasts chosen are released into the arena surrounding the blood altar and must be killed to complete the recipe. If the player dies during the attempt, the recipe fails and the beasts are lost.

In the Bestiary league, players had to capture beasts themselves using nets. Some resurrected or undead versions of beasts (e.g. Bone Rhoas) did not not count as beasts, and therefore could not be captured. However, interestingly, Skeletal Beasts like Tyrannursus Maximus and The Great White Bones could be captured.