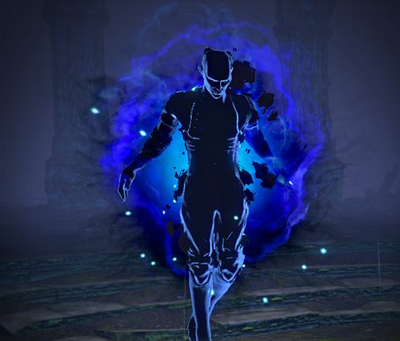 Harbingers are a type of immortal monsters. Harbingers summon enemies to fight the player while empowering them in different ways, and they can only be harmed by killing their minions. Harbingers can drop currency shards, for both ones seen in Wraeclast as well as their own currency.

Harbingers can be encountered via Kirac's Atlas missions, as part of Kirac's crafted Harbinger map modifier on map device (if Harbinger is rotated as available mod in that patch) or as part of specific atlas passive skill, or in Harbinger nodes in the Azurite Mine.

Harbingers are invincible enemies that summon waves of enemies and summon new ones as they are defeated. Harbingers can also indirectly attack by empowering their minions, such as creating a Righteous Fire aura around a monster or have all monsters use Flame Dash. At higher levels, Harbingers can also summon Obelisks that can attack or power up their monsters.

Unlike the player version, Harbinger can still cast Mark skill as aura, as well as Hex as aura.

Harbingers have their own specific drop tables.

Harbingers don't drop regular items, but only currency shards. These items can directly drop from Harbingers:

When players defeat the map bosses of The Beachhead, one of the following pieces may drop. Combining these pieces can forge exclusive unique items.

When players defeat the map bosses of

, one of the following Harbinger Scroll may drop. Use the scroll on Harbinger item to upgrade it.