From Path of Exile Wiki
Jump to navigation Jump to search
For the challenge league, see Bestiary league.
For bestiary crafting recipes, see beastcrafting.
For a list of monsters, see Template:Navbox Bestiary. 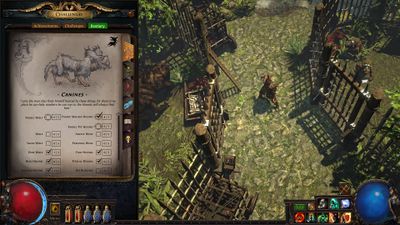 The Bestiary is a classification of the wildlife in Wraeclast. As players capture different types of beasts, their progress is tracked here. Beasts are categorized into different types on the right sidebar of the tab. When a beast is captured, a checkmark appears next to the beast's name in the bestiary. Note that not all beast is in the Bestiary, as they are not able to be captured.

The Bestiary is introduced by Einhar Frey, who players first meet in Act 2.

Humid bushland and colossal trees. You are never alone in these wooded lands.

"Man-eaters. Predators. Cast aside the childish notions of embracing these beautiful beasts, for they are mighty and violent, they will tear into shred all who approach them with disrespect."

"There in an intelligence behind the eyes of these primates, a sentience that draws you in. But there is no empathy there. No kindness. Only hatred and anger, a lust to maim and kill."

"Pity the man who finds himself hunted, there is no place he can hide, nowhere he can run to, for a maddened barking will follow, and the canine will always sniff him out."

"Shaggy mounds of muscle and hair, not just man-eaters, but eaters of man-eaters. The Ursae venture out from their dens, lumbering through wooded land, grizzly and starving for hot blood and sweet flesh."

"The abominations have no right to exist. When a man sees them, his spirit shakes, and the air around him pops and cracks, as if the universe itself is angry within this unnatural presence."

Arid heat and sweltering sands. A playground of devils and blood-starved beasts.

"The ancients looked upon them and thought them as gods, for only the gods could ascend to such lofty heights. Such is the gift of the avian lineage, but be not fooled, for through their plumage is bright and their song bedazzling, their talons harbor lethal, gratuitous power."

"Once, their ancestors ruled this world. But dethroned by arrogance of man, their cold blood boils over and their forked tongues flick in and out, tasting the air. They will take their pound of flesh, and bring misery upon any who try to stop them."

"Those who aren't crushed beneath the rock and rubble, contend against murderous creatures."

"Wandering proboscises and clicking mandibles, the swarming masses birthed from darkness destined to forever plague the known world. They bring poverty and painful poisons, those who devour the harvest."

"'Little gods of death' they are called by those who fear and know them intimately. The arachnid makes its nest inside the blanched skulls of dead men, waiting in darkness to poison the world."

The uncharted depths of chaos and control. What scaled abominations lurk below?

"Nightmares sprung forth from the tentacular void. And eldritch hatred emanates from various appendages, and the suctioning grip of their callous embrace will pull a man further into the unholy depths."

"Some say the crustacean is born from the souls of dead men. Those warriors who fought and fell. For the crab is formed with its armour intact, its sword becomes its pincers and its shield becomes its skin."

"Creatures of mud and swamp, the amphibian is a foul smelling thing. Beware his uncanny talents to breathe both above and below, for with this trick, he will lure his prey and let it sink into the deathly grip of a murky mire."

These beasts were able to be captured during the Bestiary league, but currently they are not marked in the Bestiary. Somehow they can still be capturable if there is Einhar mission happened over the listed location.