From Path of Exile Wiki
Jump to navigation Jump to search
Not to be confused with modifiers.

Stats modify a single statistic of the game. Stats can apply to most aspects of the game, such as the player's character, items, monsters, skills or an area. Common sources of stats include modifiers, passive skills, buffs and skills.

Each stat has an internal ID (for example maximum_life_+%) and a number of settings associated with it. Stats themselves do not have a value, their values are given by other sources such as modifiers or skills. The values are always integers[1] and round downs to the nearest integer if the stat value is modified[2].

The ID and the values are used for translating the stat into a more human readable format, as such, stats may often appear in descriptions differently then they are used in game. This means they may omit information (i.e. values) or change their text and numbers to be more readable. For example the stat maximum_life_+% will appear as x% increased maximum Life for positive values and x% reduced maximum Life for negative values on things that affect the player's character, but will appear as Extra Life and Reduced Life on monsters respectively.

It is also possible that the description of a stat is omitted entirely and not visible to the player, however stats will still be effective. Very often this is the case for monster modifiers such as hidden item quantity or rarity boosts. This is also the case for stats that have a value of exactly 0.

Stats will stack with themselves additively, so two or more stats with the same ID will simply be added up. [3]

However, there is a distinction between Global and Local stats:[4]

Local stats will only be added to the relevant source.
Global stats are applied globally as the name suggests.

Rule of thumb based on descriptions

The visible description generally hints at a few rules for the interaction. However be wary there may be edge cases where it behaves differently.

For more information about the symbols, see sum and product notation.

Also see the example section below.

Stats are only applied once per calculation. The usual order of application is:

Applicability from other sources

Often a stat has a set of types determining to which statistics it applies. Types can be subtypes or supertypes of other Types. Supertypes affect their subtypes but not vice versa. Many types correspond to Gem Tags; however, this relationship is not strict. For example,

Molten StrikeMolten StrikeAttack, Projectile, AoE, Melee, Strike, Fire
Level: (1-20)
Cost: 6 Mana
Attack Damage: (110-185)% of base
Effectiveness of Added Damage: (110-185)%
Projectile Speed: 750Infuses your melee weapon with molten energies to attack with physical and fire damage. This attack causes balls of molten magma to launch forth from the enemies you hit, divided amongst all enemies hit by the strike. These will explode, causing AoE attack damage to enemies where they land.(2-75) to (3-113) Added Fire Damage
Fires 3 additional Projectiles
60% of Physical Damage Converted to Fire Damage
+(2-6) to Melee Strike Range
Projectiles deal 50% less Damage with Hits and Ailments

Additional Effects per 1% Quality:
1% increased Fire DamagePlace into an item socket of the right colour to gain this skill. Right click to remove from a socket.

has the Melee tag, but its projectiles do not do melee damage, and

Additional Effects per 1% Quality:
1% chance to Ignite enemies
1% increased Skill Effect DurationPlace into an item socket of the right colour to gain this skill. Right click to remove from a socket.

has the Attack tag, but the charge detonation does not do Attack damage.

Some words have special meanings:

Converted statistics count as both the Type converted from and converted to, but can only be affected by a particular stat at most once.

The following applies to most statistics that can be stacked, as it's a side effect of the linearity of the stats.

From the general interactions it is possible to derive some basic rules for the effectiveness of stacking stats:

Remember that some stats have altered descriptions and in reality often values behave differently from what is shown. A good example are resistances - it is better to think of them as damage reduction in this case (75% being 75% less damage, aka a 0.25 multiplier). 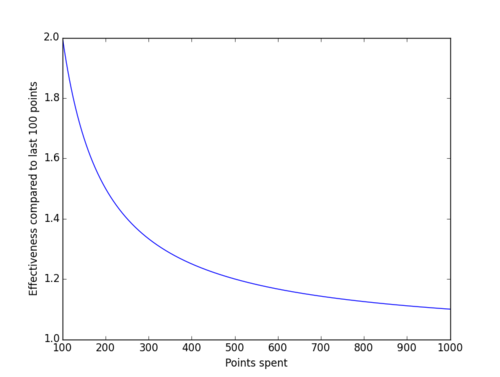 For increased and more modifiers, they generally scale as:

Similarly, for the reduction:

"Reduced" is equivalent to "increased" (but getting smaller instead of larger); likewise "less" works in the equivalent way as "more".

On each weapon, you will get a total of:

However, as you can see the stats from each weapon will not add up, because they're local to each weapon.

For this example, we assume the following:

First the local stats are applied:

In the next step, damage conversion. Broken down into two individual branches

We break it down into two branches right away: