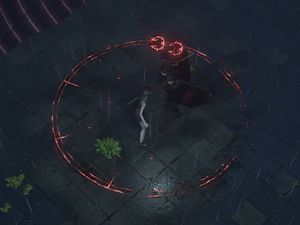 Vulnerability is a hex spell that curses all targets in an area, making them take increased physical damage and granting hits dealt on the cursed targets a chance to apply bleed. Ailments applied to cursed targets will deal its damage faster.

Vulnerability can be created from the following recipes:

The curse on hit Delve mod is appeared on ring only, and can be dropped from the node that states Contains Physical Items.

The following passive skills are related to Vulnerability:

Vulnerability is one of the curses that can be rolled on maps and vaal side area (known as "secret_area" in spawn weight table), the curses affect the entire area and cannot be removed. The level of the curses is fixed (level 1)