Elemental WeaknessSpell, AoE, Duration, Curse, Hex
Level: (1-20)
Cost: (16-33) Mana
Cast Time: 0.50 sec
Radius: 22Requires Level 24Curses all targets in an area, lowering their elemental resistances.Per 1% Quality:1Superior2Anomalous3DivergentCursed enemies have -0.25% to Elemental Resistances0.5% increased Effect of Curse0.5% increased Duration of Elemental Ailments on Cursed enemiesBase duration is (9-10.9) seconds
Cursed enemies have -(20-39)% to Elemental Resistances
Curse gains 10 Doom per second if you Cast this Spell yourself
+(0-10) to radiusPlace into an item socket of the right colour to gain this skill. Right click to remove from a socket. 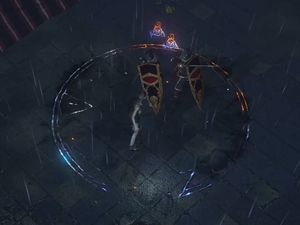 Elemental Weakness is a Hex spell that curses all targets in an area, lowering their elemental Resistance. If the player character self casts this hex, it gains 10 Doom per second. Doom increases the effectiveness of this hex. 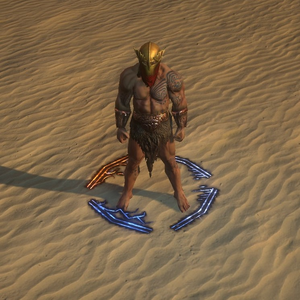 You are cursed. You take more Elemental damage.

Elemental Weakness can be created from the following recipes:

The following mods are related to Elemental Weakness:

These Synthesis implicit are able to find in pre-synthesised item or added via Harvest mechanics:

Elemental Weakness is one of the curses that can be rolled on maps and vaal side area (known as "secret_area" in spawn weight table), the curses affect the entire area and cannot be removed. The level of the curses is fixed (level 1, -20% elemental resistance) and NOT affected by awakening bonus objectives. It can be reduced by upgraded Soul of Yugul or other item mod that offers reduced/less effect of curses on you

The following map mods can only be find in legacy map item in permanent leagues: