From Path of Exile Wiki
Jump to navigation Jump to search
This page is about the game mechanic. For other uses, see Harvest (disambiguation).

Harvest is a league mechanic where the player fights monsters in The Sacred Grove to access various Harvest crafting options that they provide.

This page discusses the current iteration of the Harvest mechanic - see the Harvest league page for a discussion of the mechanic as it was originally introduced. 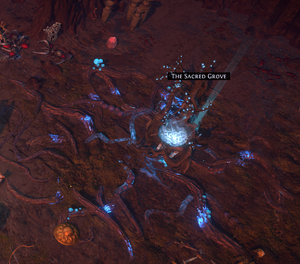 A portal to The Sacred Grove.

Maps have a chance to contain a portal to The Sacred Grove. Each Sacred Grove instance contains several Lifeforce Dispersers, which are each attached to two patches of seeds. Each seed patch shows a list of monsters that will spawn from the patch. Players can choose which patch to activate - when a patch is chosen, the other patch attached to the Lifeforce Disperser withers, and monsters spawn from the activated patch. These monsters drop Crystallised Lifeforce which can be used for crafting recipes at the Horticrafting Station.

See Harvest crafting quick guide for a visual walkthrough of a Harvest encounter.

The Sacred Grove is part of the map instance it is entered from, which means map modifiers apply within the Grove as well.

Player can access alternative version of the area by using a

Sacred BlossomSacred BlossomIt isn't the twisted transformative power of corruption that makes it so dangerous.
It is its ability to hide in plain sight.Open a portal to the Sacred Grove by using this item in a personal Map Device. Can only be used once.

. The item would open the boss fight version of The Sacred Grove.

There are various Atlas Passives that affect Harvest:

The Harvest map mechanic has 3 bosses that originated from the Tier 4 plants of the Harvest league mechanic:

They now spawn with a very low chance as part of seed patches in The Sacred Grove. Their plants are large and visually distinctive, but it is possible to 'lose' their encounter by choosing the other seed patch, causing the T4 plant to wither. It is possible for more than one copy of a T4 seed to appear in a plot, and it is possible for the boss to get duplicated via Harvest passives.

The T4 bosses have a chance to drop a

Sacred BlossomSacred BlossomIt isn't the twisted transformative power of corruption that makes it so dangerous.
It is its ability to hide in plain sight.Open a portal to the Sacred Grove by using this item in a personal Map Device. Can only be used once.

which is a map fragment item that allows a player to access the ultimate Harvest boss: Oshabi, Avatar of the Grove (same Oshabi as the NPC of the Harvest mechanic introductory quest).

Each boss can also sometimes drop their exclusive unique items: