Augmented Distant Memory is a unique

Synthesised MapSynthesised MapMap Level: 77
Map Tier: 10
Guild Character: uTravel to this Map by using it in a personal Map Device. Maps can only be used once.

. The base is T10, but the area level of the unique map is overridden as 80. The area level override prevents further modification of monster levels, such as from the atlas passive notable Deadly Nightmare.

Augmented Distant Memory is not part of the Atlas of Worlds. There is no bonus objective for this map.

This map, however, can be witnessed by the Maven as part of the prerequisites of

The map uses The Torched Courts tileset. The area contains several bookshelves that block paths and separate rooms. Some bookshelves contain holes which indicate that they can be teleported through using

Blink ArrowBlink ArrowAttack, Minion, Duration, Movement, Travel, Bow
Level: (1-20)
Cost: (14-20) Mana
Cooldown Time: 3.00 sec
Can Store 1 Use(s)Requires Level 10Fires an arrow at the target destination. When the arrow lands, you are teleported to it and a clone is summoned at your old location. The clone is a minion that uses your bow and quiver.Base duration is 3 seconds
Minions deal (0-114)% increased Damage
(0-57)% increased Minion Maximum Life
(0-47)% increased Cooldown Recovery Rate
Minions deal 75% more Damage

Additional Effects per 1% Quality:
This Attack and Minions have 1.5% increased Projectile SpeedPlace into an item socket of the right colour to gain this skill. Right click to remove from a socket.

Additional Effects per 1% Quality:
0.5% increased Cooldown Recovery RatePlace into an item socket of the right colour to gain this skill. Right click to remove from a socket.

or other similar movement skills. The boundaries of the map are surrounded in blue memory decay typical of a Synthesis zone, but cannot be directly interacted with. A portal to the boss room is located at the top left.

Items found from this monster

A blind run walkthrough of the map and map boss

The following drop-restricted items can drop in this area.

Augmented Distant Memory has restrictions on where or how it can drop. It cannot be chanced. Drops from T11+ Map Bosses, and sometimes sold by Kirac or Tujen.

This item can be acquired in the following areas:

Augmented Distant Memory can be created from the following recipes: 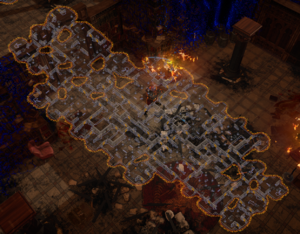 Typical layout of the map.

The map is dropped as a corrupted item since version 3.17.0. Even using a non-corrupted item from older map series, the vendor recipe would exchange the old map with a new Augmented Distant Memory unique

Synthesised MapSynthesised MapMap Level: 77
Map Tier: 10
Guild Character: uTravel to this Map by using it in a personal Map Device. Maps can only be used once.

(of the current map series), but corrupted.