From Path of Exile Wiki
Jump to navigation Jump to search
This page is about the game mechanic. For the league, see Delirium league. For the essence, see Essence of Delirium. 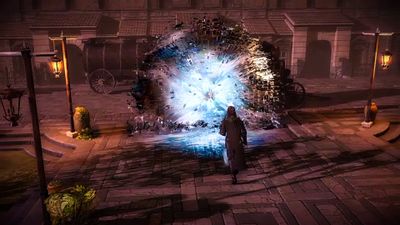 A Mirror of Delirium

Delirium is a zone-wide effect that spawns new enemies and empowers existing ones. This encounter is considered Extra Content and has a baseline 8% chance to appear in any non-unique map area.

Delirium Mirrors can appear from the Torched Courts in Act 5 onwards at rate >8%. They stop appearing for characters with level 72 and higher for areas with level lower than 65[1].

In maps, Delirium Mirrors have a base 8% chance to appear in a zone. 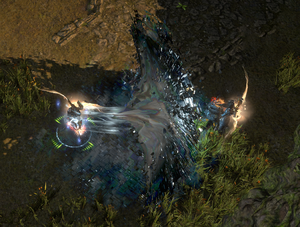 A Delirium mirror spawns on a map. It reflects the player's character as shown.

Randomly while players are completing the acts or running Maps, a Mirror of Delirium will spawn. They will always spawn within a close distance from the zone entrance.

Once a player passes through it, it spawns a gray mist that spreads outwards throughout the map, beginning the Delirium encounter. 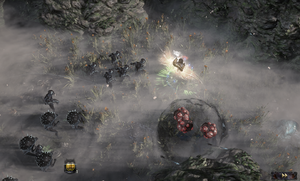 New enemies and hazards can spawn within the mist and existing enemies can receive a Delirium modifier, making them stronger or giving them new attacks. All enemies in the mist are Delirious, giving them increased damage mitigation and damage. The further out you are in the mist, the stronger the effect.

Enemies in the mist can drop Cluster Jewels and

As you kill enemies inside the mist, a reward bar on the bottom left will start filling up. Filling the bar will cause you to gain the reward type after the Delirium encounter, and can be filled multiple times. When the first bar reaches level 3, a second reward bar will appear, and at level 5 a third reward bar appears.

Higher percentages of Delirium increase both monster damage and monster damage reduction. Through empirical testing and official reference points at 100% Deliriousness, it was possible to obtain the following scaling estimates.

Additionally, it is speculated that it provides an overall more multiplier to monster item quantity and rarity[2][better source needed]. However, there are several caveats to this that are being investigated by the Prohibited Library. Monsters from strongboxes[3], as well as possibly other monsters that are not immediately spawned on entering an area, do not appear to be affected by this multiplier. 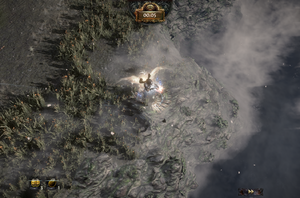 The countdown timer displaying when the encounter is about to end.

Delirium encounters only last a short period of time. After a certain period of time, the mist will stop spreading, and start to dissipate outwards in a donut shape. If you step out of the mist for more than 5 seconds, the Delirium encounter will end. Any enemies outside the mist will have their Delirium modifiers removed. The encounter can also be prematurely ended by pressing a button on the bottom right (which can be key bound). Certain actions will pause or extend the time before the mist stops spreading. The mist also stops moving while there are no players in the instance.

The following will pause the mist timer:

The following will extend the mist timer:

Map items can be affected by a special modifier which covers the entire map in mist permanently. The mechanics are similar to the Delirium that can randomly occur in a map, with the following exceptions:

This modifier has five levels of strength, expressed as a percentage -- 20%, 40%, 60%, 80%, or 100%. The higher the percentage, the tougher the monsters and the greater the rewards. Enemies at very high Delirious percents are extremely tough, with even normal rarity enemies becoming comparable to high tier map bosses.

Map items can drop with this modifier present at any of the five levels of strength. Delirium orbs can be used on map items. An orb adds 20% delirium to a map item that does not already have the delirious modifier, or increases the map's existing delirium strength by one level (20%).

Starting from The Torched Courts (Act 5), a voice starts talking to the player whenever you touch a Mirror of Delirium. He has unique lines in Act zones.