Blink ArrowAttack, Minion, Duration, Movement, Travel, Bow
Level: (1-20)
Cost: (14-20) Mana
Cooldown Time: 3.00 sec
Can Store 1 Use(s)Requires Level 10Fires an arrow at the target destination. When the arrow lands, you are teleported to it and a clone is summoned at your old location. The clone is a minion that uses your bow and quiver.Base duration is 3 seconds
Minions deal 75% more Damage
Minions deal (0-114)% increased Damage
(0-57)% increased Minion Maximum Life
(0-47)% increased Cooldown Recovery Rate

Additional Effects per 1% Quality:
This Attack and Minions have 1.5% increased Projectile SpeedPlace into an item socket of the right colour to gain this skill. Right click to remove from a socket. 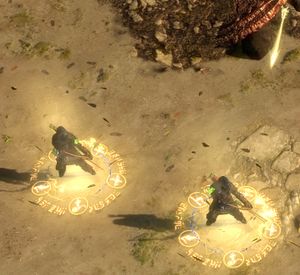 Blink Arrow is an attack that fires an arrow, upon reaching the destination you are teleported there and a clone is summoned at your previous location. The clone is a minion that uses your bow and quiver.

When the skill is cast, the player fires an arrow. The arrow takes time to land and the player can take damage during the time it takes for the arrow to hit the ground.

The frame before the arrow lands, the player will still be in their old location. Anything trying to damage the player at that location can do so up to and including this frame.

The next frame, the player is teleported, and is now at the location the arrow landed.

If the player is suffering any debuff that restricts movement from when the player begins to aim upward to having fired the arrow, the skill is then stopped and put on cooldown.[a] This makes the skill somewhat useless if the player is surrounded by enemies and has low Stun resistance. It is heavily advised to consider the skill as a way to quickly get to a safe location and not as an instant escape method.

The minion generated by this skill will spawn with the current % of total life as the player; if the player is on Low Life (e.g. via

Petrified BloodPetrified BloodSpell
Level: (1-20)
Reservation: 35% Mana
Cooldown Time: 1.00 sec
Can Store 1 Use(s)
Cast Time: InstantRequires Level 24Applies a buff that protects the lower half of your life, preventing some of the immediate life loss when damaged by hits and applying the loss over time instead. Your life cannot be raised above low life other than by flasks, and while above low life, skills will cost life as well as mana.Life Recovery other than Flasks cannot Recover Life to above Low Life
When taking Damage from Hits, 40% of Life loss below half Life is Prevented, then (100-81)% of Life loss prevented this way is lost over 4 seconds
Skills gain a Base Life Cost equal to 40% of Base Mana Cost while not on Low Life

Additional Effects per 1% Quality:
-0.25% of Life loss prevented is lost over 4 secondsPlace into an item socket of the right colour to gain this skill. Right click to remove from a socket.

), the minion will also spawn at Low Life, causing it to instantly explode with Minion Instability.

Blink Arrow can be created from the following recipes:

Blink Arrow is used in the following recipes:

The following passive skills are related to Blink Arrow: No results found for the given query.