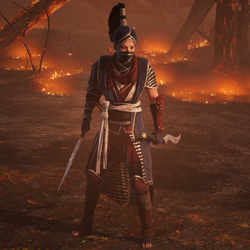 Jun Ortoi is a master introduced in the Betrayal league. She helps the player to track down members of the Immortal Syndicate.

Zones do not repeat the same type of encounter. Maps will always have a Research, Intervention, and either Fortification or Transportation as encounters.

I am Jun Ortoi, of the sun-scorched plains of Vastiri. I am investigating the disappearance of several prominent exiles. I have surreptitiously been observing your movements since you washed ashore. The way you handled the blacksmith showed me you are suitable for the task I must ask of you.

Wraeclast is lawless, but it is not without justice, and some here are more deserving of death than others. The missing were good people. Capable fighters doing what they could to bring light to a situation mired in darkness. I believe they were taken by a group calling themselves the Immortal Syndicate, and I fear they will not be the last.

I've spent some time around powerful magical objects. There are some whose magical properties are obscured and tangled, trapped and restricted by a curse placed upon it. I cannot restore such items to their original glory, but I can at least break the curse and release some of its power, if you bring it to me.

You have heard of the famed Perandus family, I have no doubt. Wealthy and powerful and responsible for putting Malachai in position to bring Wraeclast to ruin all those centuries ago. Though Emperor Chitus is the most famous of the Perandus family, some remnants of his vile bloodline linger even still.

Janus was one such remnant. He too was orphaned, but with the Perandus coffers dry and the Perandus name worth its weight in gold, no one took him in. No one except my akhara.

That he is the only other survivor, and is now a powerful member of the Immortal Syndicate leaves no doubt in my mind that it was he who sold us out.

If there is but one silver lining in all of this, it is that I may get to sink my blades into his flesh over, and over, and over again.

Some of the members we have come across... well... they have come back from the dead. I don't have any better way of putting it.

They are no mindless zombies. Somehow they are returning... whole. This must be why they call themselves the Immortal Syndicate. Immortality is dangerous, even in the hands of those with good intentions.

I'd not believe you if I had not witnessed the boats lurching onto the shores of Wraeclast myself. So... The gods have returned, and Oriath has fallen. This complicates things, to say the least.

Exile, I believe the Syndicate has been planning to form a new government. The Templar were cruel, but at least they were mortal. If the Syndicate's power continues to grow, they will be able to rule Wraeclast and beyond without fear of reprisal, and we mere mortals will have no choice but to serve, or fuel their cycle of death and rebirth.

Kitava is slain, and you are the saviour of Oriath. In any other era, such an act would etch your name into the pages of history, but...

The Immortal Syndicate remains, positioned to wrest control of the few remaining survivors, and you are the only one with the might to tear them down. Please, for the sake of those that still live, we must push onwards. Oriath has seen too much horror as it is.

Anyone who believes the world is coming to an end raises some red flags. He has that unusual accent, but he claims to be from Oriath. I think Einhar is hiding more than just his face.

Niko is... a strange one. I believe there is a good person buried within him somewhere, but he is lost within his own darkness, struggling to climb out.

Greed has spilled more blood than all the other vices combined, and Alva is one of the greediest people I have ever met. That you have aligned with her makes me question your own motives.

Helena looked within herself and chose to turn her back on what she was made to believe, even under fear of death. She is a woman worthy of admiration.

Exile, I fear I have not been entirely honest with you. This dusty pit was once the Forbidden Vault, and I its guardian. That you have not heard of it is not surprising; it was kept in absolute secrecy for countless generations, known only to my akhara, the--... the Order of the Djinn.

It feels so strange to tell someone. To speak so plainly would have been a sin of the highest order, punishable by death. It seems harsh to an outsider like yourself, but you do not know the importance of what we did...

My akhara, my people, were long ago tasked with protecting the people of Wraeclast from themselves. Many artifacts of great power exist -- you have come across some such in your travels. But there are some artifacts whose power is so great that to use them would put the world in jeopardy. Artifacts like the Horns of Kulemak. We, the Order of the Djinn, existed to keep such power sealed away and secret. Better that the world forget that it, and we, exist, than fight for control of a power they have no hope of controlling.

Order of the Djinn

You have not heard of us because you were never meant to hear of us. I say us... in truth, it is just me left. We came from all walks of life, but we were all orphans, taken in and raised by the Order, and taught never to speak of it under punishment of death. It sounds harsh, I understand, but such was the importance of our duty that a life of solitude and secrecy was necessary.

For hundreds, maybe thousands of years, we remained secret, until Janus Perandus... that... that imbecile... He sold us out. Reaching for the last vestiges of his ancestral glory. Just like his great grandfather Chitus, he may have doomed us all.

We were only taught what was passed down for generations. We believed the Horns to be the ultimate tool of life and death; capable of siphoning the very breath of life from any living thing. We do not know where it came from. Perhaps the remains of a powerful, long-dead animal. Perhaps a creation of the gods themselves. Regardless of its provenance, I believe the Horns are what have given the Immortal Syndicate their miraculous ability to return from the dead unscathed.

This dialogue is removed in version 3.17.0

Navali can see the future, yet she does nothing to prevent malicious acts. Am I just supposed to act like that is fine?

This dialogue is removed in version 3.17.0

The rules of my akhara forbid women ever feeling the touch of a man. No families, no loose lips, no loose ends. But it makes no mention of two women... When our jobs are done at last, I believe I would like a stronger bond with her. Perhaps we could find some orphans of our own to take in.