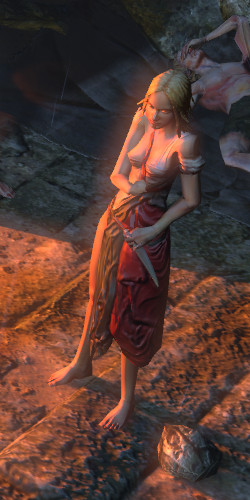 Nessa is an NPC that lives in Lioneye's Watch in Act 1.

"What little help I can offer is yours."

"While we live we are blessed."

Nessa is the first important character the player comes across and, along with Bestel and Tarkleigh, she provides the initial quests for the player. She is also a medicines and trinkets vendor who will purchase items from the player and sell a small stock of goods.

Unlike the other exiles Nessa is a shipwreck survivor, not a branded criminal - she lost her family in a wreck offshore and found herself stranded on the shores of Wraeclast.

The de facto "mother" to the sickly brood of the shore encampment, Nessa uses her medical skills to tend to the wounded and dying who pass through the encampment.

Tarkleigh seems to harbour some romantic feelings toward her but if he feels anything more than benign kinship, she, apparently, does not.

In Act 6 she is kidnapped by Tsoagoth, The Brine King and forced to be his bride. She resists as best she can but eventually succumbs to his "charms". She is never heard from again.

I saw what you did to Hillock out there, Witch. Your black art is the reason you’re here, exile. It may also be the only thing that allows you to see another dawn.

Back in Oriath, I Judged your kind without hesitation, in Wraeclast, I don’t have that kind of luxury.

I saw what you did to Hillock out there, Shadow. Your murderous art is the reason you’re here, exile… and it’ll be the one thing that sees you through another dawn.

Back in Oriath, I feared your kind… condemned you from afar. In Wraeclast, I don’t have that luxury.

Now there’s a face I never expected to see exiled. The maidens of Oriath must lie wailing in their beds now that their mighty Duelist has left them. Or is that why you’re here? Did you disappoint your adoring fans somehow?

I’m Nessa, and I suppose I should thank you for ridding us of Hillock, that putrid giant you felled out there.

Back in Oriath I disdained your kind. In Wraeclast I don’t have that luxury.

Tala moana, Marauder of Ngamakanui. No need to be surprised, Karui. My father and I were amongst those who tried to save your people from ignorance and damnation. My father paid for his arrogance with his life. I’m still paying for mine.

I’m Nessa. And I Suppose I should thank you ridding us of Hillock, that putrid giant you felled out there.

Be careful in the days to come. Karui savagery is nothing compared to the ferocity that is Wraeclast.

I know you. The blasphemer. That’s what my father called you. God saw fit to drown my father, and everyone else I ever loved. I wonder what fate He has in store for you.
I’m Nessa, and I suppose I should thank you for ridding us of Hillock, that putrid giant you felled out there.

You know, back in Oriath, I was taught that God loved me. He has a funny way of showing His love, doesn’t He, Templar.

I’ve seen you before, back in Oriath. Running like a frightened rabbit from my father and his gamekeepers. Fleet as a fox you were, even with that leg of prize venison over your shoulder. And from what I saw you do to Hillock, you’ve grown even faster since then.

I hope your speed never fails you, Ranger. It’s all that stands between you and death, here in Wraeclast.

Welcome to our home away from home... for what it's worth.

I'm Nessa. That putrid giant you just laid to rest? That was Hillock. You're lucky; he's eaten stronger exiles than you.

Don't count on that luck lasting. It's in short supply here in Wraeclast. Still you've rid us of a curse, and we owe you our thanks.

Lioneye’s Watch isn’t much, but it’s ours. We could use you here, while you live.

But should you wish to venture out, do just one thing for me: Out on the coast, amongst the wrecks, there must be a ship’s medicine chest. I have many to care for and there’s only so much I can do with herbs and seawater.

I can think of only one reason why Piety would be here. She’s interested in the sickness that pervades this place, the corruption that raises the dead and twists the wildlife into aberrations.

The 'Merry Gull' ran aground on the Tidal Island trying to escape from pirates. As tends to happen here in Wraeclast, her crew met a far worse fate: Cannibals.

Tarkleigh pulled Bestel from some hideaway in the wreckage... the ship’s only survivor. Whether the ordeal fractured his mind or whether it was just his nature all along, it’s clear that Bestel sails a different course to the rest of us.

Tarkleigh’s as good a man as you can find on this God-forsaken coast. He has some wrongs to right, no doubt. What they are, I’ve never asked and I never will. If not for Tarkleigh, we’d be all dead.

A medicine chest! This means more to us than you can know! There are some who wouldn’t have lasted the night without it. Take this, in return for the knowledge that one can do more than suffer in Wraeclast. You and Tarkleigh, you give us something better than serums and salves. You give us hope.

Don’t tell Tarkleigh, but they’re the foulest fowl I ever tasted. Still, exiles can’t be choosers.

Surviving in Wraeclast is a simple matter: don’t be curious. Most exiles test fate, braving the coast in hopes of taking Prisoner’s gate to greener pastures. None have returned. Perhaps they were right, or perhaps their lives were dashed as quickly as their hopes.

It’s told that Brutus was a man of stature, the warden of Axiom Prison. A man cursed by a twisted enchantment of his own commission. If there’s a grain of truth to the tale then Brutus has my pity. Some of us pay too dearly for our mistakes.

For some, death is welcomed with open arms. Did you end Brutus’ suffering out of avarice, or mercy? Only you know the answer to that one.

That graveyard of broken ships? It’s Merveil’s welcome mat. And those poor, haunting souls among the wrecks? There’s “no happily ever after” when you court one of Merveil’s brood.

Merveil dwells in the caves beyond the wrecks, at the head of Siren’s Cove. Leave her be and we can only hope that she continues to return the favour.

If you must take your chances with the Siren, then have this. It may be of some help. But please, know that you don’t have to do this. Tarkleigh and I are getting used to having you around.

I thought you were a fool for seeking out Merveil. A fool in love with death. Now… I don’t know.

Still, you’ve delivered this coast from the terrors that long held sway here. We may now find some respite and that’s more than any of us could have hoped for.

But please… consider this. What have you become when even nightmares fear you?

Some have dared hope for a better life beyond Prisoners Gate. Not me. My place is here, easing the suffering of exile as best I can.

These appear during the The Brine King quest.

The Brine King... his time has almost come. Then hope will be... I will be gone. Please... take the Black Flag. It once fluttered from the mast of the Black Crest, Weylam Roth's ship. Throw it into the flames of the Beacon. It's your only chance of reaching me, of turning this tide. The King can't keep secrets like this from me any longer. It's just... the way of things. Find me, please, before...

[as a male character] So strong, so dedicated. A man like you would never dissapoint a lady in need. You're a gift, don't you see? A sumptuous feast for his majesty on his wedding day. Really, we are both so touched by your generosity.

[as a female character] So courageous, such a fine example of womanhood. I simply knew you wouldn't dissapoint me. Or my husband. You see, his majesty could never be satisfied on his wedding day by one bride alone. Thank you, my new sister. I shall always treasure your company.