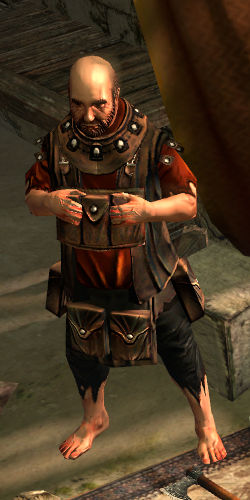 This article is a stub. Please help improve the article by expanding it.

Hargan is an NPC that can be found in The Sarn Encampment in act 3 and act 8.

I’ll miss the boy. He was always up for a laugh, wheter it was at his expense or not. But I would’ve missed our Clarissa more. Hargan’s the name, by the way. And it’s my honour to welcome you to dirty old Sarn, the metropolis of opportunity. The opportunity to make something of yourself or the opportunity to have a very messy death.

A stranger walks into a town with a lost lover in tow. Sounds like the beginning of a jest. Which I wish it bloody were. Problem is, we’re still one doe-eyed lover short, which ain’t much good to anyone. They tend to come in pairs, you see. Since you seem to be in the ‘good deeds’ business, how about throwing a Tolman into the bargain.

I was Clarissa’s guardian angel back in Oriath. Put food on her table in return fore a bit of light work. I try to keep her out of trouble as best I can here, but Sarn’s full of secrets… and Clarissa’s full of curiosity.

She’s just so… ample, is our Maramoa. In my mind you’ll find no saucier specimen of womanhood. It’s her tattoos and that fancy talk she does. Intoxicating.

She’s cool one though…

I can’t imagine what that poor bastard’s been through. It’s a miracle Grigor hasn’t completely lost his mind. Granted, he’s lost one or two pieces along the way, but there’s still plenty that’s worth listening to.

The Slums are east of here. Used to house the unwashed of the Empire a couple centuries back. Now it’s home to the walking ulcers and sores of this poor city.

Stay out of the shadows. They bite.

Gravicius is the mailed and bloodied right hand of Dominus. And I thought the Templar were meant to be spiritual men of deepest humanity. You noticed the sarcasm in my tone, right?

Had to smuggle a fellow out of Theopolis once. Got a bit too friendly with Gravicius’ wife, he did. Every Blackguard was out on the streets looking for him, so I had to think lateral-like. We took to the drains and didn’t pop our heads above the pavement until we sniffed the sea. A grubby bloody job it was, but worth it for the coin he paid.

You want a piece of Gravicius? Then sometimes the only way ‘up’ is ‘down’.

You’ve done for Gravicius? If only I could get word to that lad I smuggled away from the general’s wife at the time. The good widow will need a sympathetic shoulder to cry on.

Piety’s off to meet the Maker, is she? I’d love to be a fly on the wall for that little chat.

I’m no history scholar, but I know that Emperor Chitus was overthrown by Voll of Thebrus in the so-called ‘Purity Rebellion’. But Voll had the shortest reign of any Eternal Emperor. The cataclysm saw to that.

Victario was a poet what ended up leading a rebellion, right under the nose of Emperor Chitus. But here’s what really interests me. Our wordsmith was quite the talented larcenist as well. Pulled off the heist of the century, in the name of the people, of course. Three finely-crafted platinum busts commissioned by Chitus for his favourite trio of generals.

Victario and his cobbers holed up in the sewers. Now that you have Clarissa’s keys, perhaps you’d be inclined to search out those heroic busts for me. I’m sure I could make it worth your while.

Good to see you’re still soldiering on. With all these gods and past horrors wandering around Sarn, I don’t assume anyone’s alive and kicking these days.

Quite the pretty pair, aren’t they? Yes, pretty bloody disturbing.

That girl was once the sweetest lass I could name. nowadays she’s barking as batshite over that living corpse of hers. All it’d take is a quick hard bash with a rock and Tolman would no longer be a problem. Tempting, don’t you think?

The Ankh of Eternity

A word of caution. That ankh, it might have had some miraculous powers but I bet there's a nasty reason why Veruso hid the bloody thing away. I've tried to warn Clarissa, but her ears seem as dead as that boyfriend of hers.

If Sarn wasn’t mad enough, now we’ve got some whip-tongued hag cooking up a stinking curse in the sewers. Took her for my mother-in-law at first. But no, based on my eager historical knowledge, I reckon we’ve a certain Doedre Darktongue to contend with.

Where in blazes she’s hiding, I’ve no idea. So the only way we’re going to catch this witch is by getting our hands, and possibly a lot more, well and truly dirty. By ‘we’, I mean ‘you’, of course. The sewers are no place for a simple businessman like me.

Do us all a favour. Head into them sewers and track that old hag down. Get her to reveal herself and put her down. Hah… better your eyes than mine, eh?

Needing my eclectic expertise again, are we? Solaris and Lunaris got front and center stage among them folks of the Eternal Empire.

Solaris was thought to be the light of leadership, guiding and enlightening each emperor that sat the throne. In practice, most of them emperors turned out to be a bit dim, but then history and theology have never quite seen eye to eye.

As for Lunaris, a goddess of the moon and earth, the mother of dreams and inspiration. Doesn’t sound like a bad lady until you consider that dreams harbor nightmares and that inspiration is just one notion shy of insanity.

I‘d thank the gods, but you seem to be taking them out at an alarming rate.

Not that I'm complaining! In my experience, theocracy’s never been great for entrepreneurs like me, unless you’re in the holy relics business. It's too single-minded. Too orderly. Give me chaos any old day, for it is in chaos that opportunity is bred.

The Orbs of Sun and Moon

Powerful baubles them orbs are. As old as the Azmerians themselves, maybe even older. I've read all there is on them little beauties. The Sun Orb's said to contain all that has been, while its sister, the Moon Orb, holds all that will be. Past and future, packed up neat behind glass and thaumaturgy. Shudder to think what might happen if all that got out one day.

Grigor left without a single word to me, rude bugger, but I suspect his poetic soul has been drawn back home, to Ezomyr. A long journey, but a trek worth taking to find solace among one’s own people. Of course, they’ll get quite the shock when they see him. Let’s hope familial love is as nearsighted as they say!

There’re the fine tales Grigor will be able to tell them, of course. Come to think of it, now that Dominus has been knocked off his perch, there’s nothing to stop the Ezomytes from learning a thing or two from Grigor’s stories. They might even consider invading this jewel in Wraeclast’s tarnished crown. I certainly hope they have just such an eye for opportunity… a man could make a tidy sum helping said invaders navigate Sarn and its many hazards.

What little humanity General Titucius was born with, he traded in for strength. Went as far as to have Malachai replace his joints with virtue gems... mad bastard. Afterwards, Emperor Chitus charged Titucius with subduing the Maraketh, a job he took a little too much pleasure in, if you ask me.

Well, they're forged from solid gold, I can tell you that much. But I suppose that's not really what you're asking about.

The wings are a treasured piece of the Maraketh heritage. Back when the tribes quit their squabblings and joined hands to battle the Eternal Empire, the wings were seen as a symbol of their unity. The Golden Sekhema wore them as she led the whole bloody Maraketh horde against Sarn? She was the single greatest hope for the Maraketh, was that Asenath.

Hector Titucius crushed both their hopes and their precious sekhema.

Contract: A Matter of HonourContract: A Matter of HonourClient: Adiyah
Heist Target: Solerai's Spear
Area Level: (34-#)
Requires Perception (Level 2)
Requires Adiyah, the WayfinderWhen hope was but a memory, the twin sister Sekhemas Solerai and Lundara arose to unite the Maraketh.
They wielded the essence of gold and silver. The Spear is one of the two weapons that forged us."

, it was revealed that Adiyah's sister Nashta stole

Solerai's SpearSolerai's Spear"When hope was but a memory, the twin sister Sekhemas Solerai and Lundara arose to unite the Maraketh.
They wielded the essence of gold and silver. The Spear is one of the two weapons that forged us."