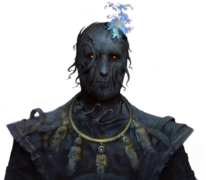 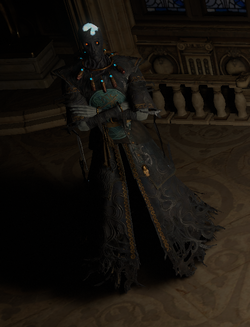 "The Envoy's role in Echoes of the Atlas is to initially foreshadow the arrival of the Maven, and specifically warn you of your first upcoming boss encounter where she's present. From both a mechanical and narrative standpoint, it is important that players don't find themselves surprisingly overwhelmed by what the Maven adds to the boss fight. Narratively, however, the Envoy serves a larger purpose of beginning to illustrate, in florid and opaque language, the broader unknown and dangerous universe the Atlas seems to reside in." Senior Narrative Designer, Nick Kolan.[1]

The Envoy is an NPC randomly encountered in maps. A messenger from a place of great darkness, great distance, and warns that his ward, The Maven, has come - to witness suffering, strife, and struggle.

When first travelling through the game The Exile first encountered a mysterious figure, firstly marked on the map as "The Envoy". Once The Envoy comes on screen they introduce themselves as a herald for a great and unreachable entity that has come to witness our struggle.

There are only two mentions of other entities by The Envoy; The Elder and Those It Serves. The Envoy clarifies that The Maven is not The Elder but both are related in some way.

The Full Article Is Found Here.

How The Envoy views their existence and how it came to be entangled with The Maven is explained through two encounters.

The Collapse of Order

The One To Fear

Subsequent triumphs will be marked with an unsettling statement.

There are additional facets to The Maven's observation of the character's struggle, soon leading to a desire to claim what has fascinated The Maven for so long.

The character may feel emboldened by their victory but The Envoy make sure that any feeling that suggests this is an victory are short lived.