Synthesised items were introduced in Synthesis league, in which they could be crafted by combining three fractured items in the Synthesiser. The resulting item was a new item base with special implicit mods based on the mods of the items used.

Currently, there are four ways to acquire synthesised items as core game mechanic: 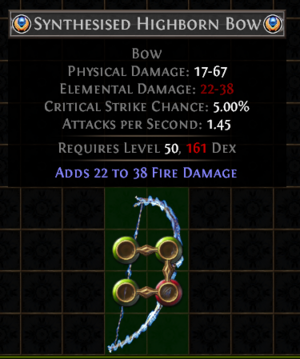 with one synthesised implicit modifier

Harvesting Namharim, Born of Night allows crafting which transforms items into Synthesised items: the original base changes into corresponding Synthesised base, random Synthesis implicits are added and if any implicits were present on the orignal item they are removed. Synthesised items cannot have influences.

Synthesized implicits can be targeted: