From Path of Exile Wiki
Jump to navigation Jump to search
For the league, see Delve league. 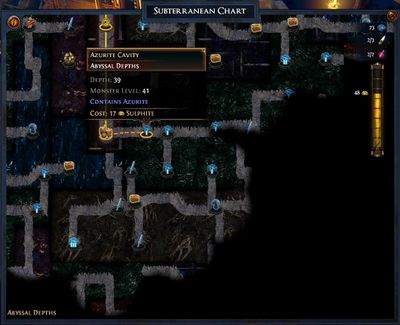 The subterranean chart of the Azurite Mine

A delve is the exploration of the nearly-infinite Azurite Mine dungeon, released in the Delve league. The character follows a Crawler (mine cart) powered by Voltaxic Sulphite through the mine to a checkpoint. Players can start delving from Act 4 onwards, when they reach The Mines and start encountering Niko, Master of the Depths.

The Azurite Mine consists of an infinite number of nodes. Each node has 1 to 4 paths connected to it, leading to nearby nodes. Each node has a checkpoint, a circle marked on the ground in a chamber at the center of the node. A node can be "cleared", meaning that the character can freely teleport to that node's checkpoint. Or it can be "uncleared", meaning that it is not accessible. The vast majority of nodes start out "uncleared".

The difficulty and rewards of delves increase based on depth in the mine. Paths deeper below the surface contain higher-level monsters, but yield higher-level rewards as well.

Progress through the mine is shared among all a player's characters in a league; different leagues will have different Azurite Mines whose nodes must be cleared separately. When playing in parties, the whole party uses the party leader's Azurite Mine, and other party members cannot continue if the party leader leaves. [1]

When a player reaches the Azurite Mine for the first time in a given league (using any of their characters in that league), only a single node is cleared, just below the mine entrance. But as the player's highest-level character in that league continues to level up, Niko will gradually dig a mineshaft, which can help speed up the player's progress in the mine.

The mineshaft is a vertical string of cleared nodes starting at the mine entrance and going straight downward. When a new mineshaft node is created, it destroys any previously-existing node in the same spot. The mineshaft depth is shared by all of the player's characters in a league, and is based on the player's highest-level character in that league. The mineshaft will eventually stop growing when it reaches a depth of 34.

The mineshaft acts as a catch-up mechanic, allowing a character to have challenging nodes available even if the player ignores the Delve mechanic for long periods of time during the campaign.

The Crawler will also pick up items dropped within a large radius around it, which it drops when the checkpoint and encounter are cleared. [1]

Voltaxic Sulphite -- usually just called Sulphite -- is a nontradable resource. It is earned during play, and spent on Delve-related upgrades and resonators.

Every delve has a cost paid in Voltaxic Sulphite. The cost depends on the distance between the two nodes and the depth of the destination node, up to a maximum of 1100 Sulphite per delve. In order to start a delve, the player must have enough Sulphite to pay the full cost. But the cost is not paid all at once; instead, it is paid gradually as a Delve proceeds. This means that failed delves will often not cost the full original amount.

Sulphite is earned during play outside the mine. Starting with The Mines in Act 4, any zone instance can randomly contain Niko, Master of the Depths. These instances will include three caches of Sulphite. Clicking on a cache will summon Niko to harvest it, adding the Sulphite to that character's total, as well as to the total of nearby characters. The higher the instance's level, the more Sulphite is gained.

A character can only hold a limited amount of Sulphite at a time. A player can permanently upgrade a character's maximum Sulphite capacity at the Voltaxic Generator in the Mine Encampment using Azurite. [1]

A player can use Sulphite at the Voltaxic Generator to purchase various permanent upgrades to a character's Delve-related capabilities. These upgrades and their costs are discussed below. Note that the costs of some upgrades can become discounted if a player goes unusually long without buying them.[citation needed]

A player can also use Sulphite to buy resonators from Niko, Master of the Depths at the Mine Encampment.

Sulphite scaling based on area level

Those are base values and can be further modified by map quantity. In maps, effective area level is used instead of base area level.

Light and darkness play a crucial role in delves. A character staying outside the light for long will almost certainly die.

Paths in the Azurite Mine are normally dark. Generic light radius modifiers will not work in the mine.

The player can permanently upgrade a character's Crawler light radius at the Voltaxic Generator using Azurite.

Stalkers, a monster found in Delves, can momentarily disable the Crawler's light source.

When a Delve is successfully completed, the Crawler will leave a permanent cable along the route taken by the Crawler during that Delve, permanently lighting that route along the path.

If a character moves outside of lit areas (whether during a Delve or not), the character rapidly begins taking damage from a stacking Darkness debuff. Stepping into a lit area clears the debuff. Allied minions and totems will not take darkness damage.

Darkness also affects combat. Monsters at the edge of the darkness take reduced damage, and monsters totally within the darkness cannot be damaged at all.

The player can permanently upgrade a character's darkness resistance at the Voltaxic Generator using Azurite.

Flares are consumable items that can be used to create a temporary lit area. Flare uses cannot be targeted; when used, the flare drops at the character's feet. Flares can only be used within the mine; they can be used whether or not a Delve is currently in progress.

Flares can be purchased at the Voltaxic Generator using Azurite, or found in Flare Caches during delves.

A character can only carry 3 Flares at first. The player can permanently upgrade a character's maximum Flare capacity, Flare light radius, and Flare duration at the Voltaxic Generator using Azurite.

When a character enters the Azurite Mine, the game will normally spawn a new instance covering a 5x5 grid area around the character's location. If the instance is for a delve, it will always contain the full path that the delve will follow.

If a player currently has a mine instance created, the game will create a new instance and load the character into that instance in the following circumstances:

Otherwise, the character will continue to use the current instance.

Ordinarily, a character can always safely return to the same instance (rather than creating a new one) if the player clicks on the "Visit: The Mine" icon in the upper left corner of the Subterranean Chart. However, a solo player whose character dies in an instance can never return to that instance. That means that all items in the instance are lost. 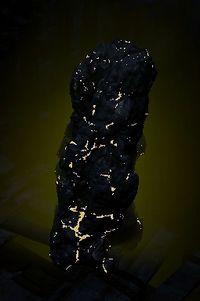 The mines contain many small containers of loot, often hidden away in dark side areas along a path. These containers faintly sparkle, but their names do not display unless a character moves close to them. 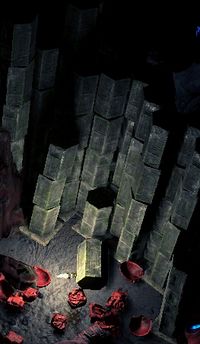 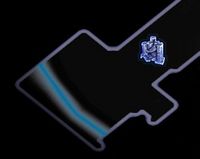 Some nodes on the Subterranean Chart will have no paths shown leading to them. This means that the path to that node is hidden. These hidden paths are blocked by a fractured wall somewhere in the darkness along a side route from a nearby node. Destroying this fractured wall will permanently reveal the path to the hidden node on the Subterranean Chart, and the player can now start a delve to the previously-isolated node.

Fractured walls and the areas behind them will not normally appear on the minimap. However, if a character moves close enough, an icon will appear in the player's minimap for as long as the character remains in range. Fractured walls can be destroyed using dynamite. A dynamite charge will destroy any fractured wall within its blast radius.

Dynamite is a consumable item used to destroy fractured walls. When used, a dynamite charge will detonate after a brief delay. The detonation will destroy any fractured wall within its blast radius, and deal area-of-effect damage to monsters within the blast radius.

Dynamite can be purchased using Azurite, or found in Dynamite Caches during Delves.

A character can only carry 3 dynamite charges at first. The player can upgrade the character's maximum dynamite capacity, dynamite blast radius, and dynamite area-of-effect damage at the Voltaxic Generator using Azurite.

To find hidden paths more easily, use the following rules:

The weight is scaled between the lower and upper entries based on current delve depth. See the table below for data mined values.

If your character is below or at depth 50, the biome will not spawn.

If your character is between 50 and 100, the biome will spawn and the weight will increase accordingly;

If your character is below depth 100, the biome will always have a weight of 100

A city biome may contain a special boss. Each boss can only spawn below a certain minimum depth.

There are other minor unique bosses for other Delve nodes, such as:

There is additional scaling starting at depth 1600, which caps out at around depth 2586.