Flicker StrikeAttack, Melee, Strike, Movement, Duration
Level: (1-20)
Cost: 10 Mana
Cooldown Time: 2.00 sec
Can Store 1 Use(s)
Attack Speed: 120% of base
Attack Damage: (142-210)% of base
Effectiveness of Added Damage: (142-210)%Requires Level 10Teleports the character to a nearby monster and attacks with a melee weapon. If no specific monster is targeted, one is picked at random. Grants a buff that increases movement speed for a duration. The cooldown can be bypassed by expending a Frenzy Charge.Base duration is 3 seconds
10% increased Attack Speed per Frenzy Charge
15% chance to gain a Frenzy Charge on Hit
Buff grants 20% increased Movement Speed

Additional Effects per 1% Quality:
0.25% chance to gain a Frenzy Charge on Hit3% increased Cooldown Recovery Rate1% increased teleport rangePlace into an item socket of the right colour to gain this skill. Right click to remove from a socket. 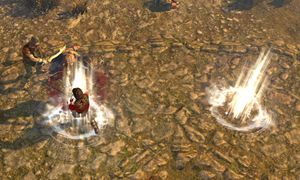 Flicker Strike is a melee attack skill that teleports the character to a nearby enemy and strikes it with their weapon and grants increased movement speed for a short time. If no specific monster is chosen, one is picked at random. The skill has a cooldown that can be bypassed by expending a Frenzy Charge and has a chance to generate a Frenzy Charge when used.

The character is considered to be stationary while flickering for the purpose of receiving buffs such as the Inexorable notable passive skill, and that they have moved each time they flickered. For this reason the character never benefits from "while moving" buffs and the timers for scaling stationary buffs are continuously reset.[1]

Minimum Frenzy Charges do not count as consumable for flicker strike

Dual Wielding: Dual Wielding while using Flicker Strike will cause the player to alternate weapons each attack.

Melee Strike Range: Increases or reductions to Melee Strike Range have no special interaction with flicker, you will neither "land" farther from the target when you flicker, nor will you be able to initiate a flicker from father away.

Flicker Strike can be created from the following recipes: