In order to level a character up it is necessary to get more experience. Currently there is only one source for experience in this game, which is killing monsters. Every monster gives experience depending on the type of the monster, its rarity, the area level and certain stats affecting the monster or the area it is in. The amount for the next level increases very fast.

The total experience required to reach each level, displayed in a graph.

The amount is the same for every character in every league. The number shows how much total experience is necessary to reach the level.

Death occurs when the player's Life reaches 0[1]. In default leagues, loss of experience is incurred upon death. The penalty is a percentage of the total required for the next level and is applied as follows:

Losing experience in this way will not cause you to lose a level.

In player-versus-player battles, the experience penalty does not apply. Likewise, a hardcore character that dies in PvP will not be lost. 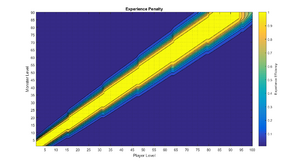 The player suffers a penalty to experience gained if the player is too far above or below the monster's level. There is a safe level range where no penalty is applied, which is equal to three plus one for every sixteen complete player levels:[2]

For player levels below 95:

For player levels equal to or higher than 95:

3.1 XP Penalty is a new penalty for level 95 and above [3] listed in the following table:

Areas with monster level above 70 are considered to have a lower monster level for the purpose of experience penalty calculations.[4] This has no effect on the stats of the monsters in the area or the loot that those monsters drop.

An analytically deduced formula for the preceding table is:

An additional consequence can be seen by the difference in XP multiplier across different levels. For example, tier 10 content at level 94 gives 9.6% experience, but at level 99 only gives 2.5% experience. This means that if a level 94 and 99 were to theoretically do the same tier 10 content (separately from each other), it would take the level 99 approximately 3.84 times longer doing the same content to gain the same absolute amount of experience. In other words, if a level 94 were to gain X million experience in tier 10 maps in one hour, then it would take the level 99 about 3 hours and 50 minutes to gain that same X million experience if they were going at the same pace.

Note that changing the tier between 4 and 15 for the above chart does not change the percentage values very much, in each case, no matter which monster level the zone is, base level 98 will still be roughly 50% of the way from 90->100, and base level 99 will still be roughly 70% of the way. It works out this way because the XP multiplier only starts to bottom out at 1% when you're level 99 and running a tier 3 (effective monster level 70) zone; in higher level zones, the XP penalty formula decreases approximately linearly, and keeps roughly the same proportion between each level. This is where the efficiency aspect comes into play again. At level 99, if you can clear a tier 10 zone at most 2.5 times as slowly as a tier 3, you're better off running a tier 10 instead of a tier 3 (multiplier for level 99, tier 3 = 0.01, multiplier for level 99, tier 10 = 0.025). Similarly with Level 90 players, but it's more dramatic, as Level 90 tier 3 multiplier = 0.064, and Level 90 tier 10 multiplier = 0.306 [4.78 times as much]. So you'd need to clear a tier 3 at least 5 times as fast as a tier 10 on a level 90 character in order to be efficient.

We can use the efficiency calculations from above to show how much experience a player of a given level must get per unit time in order to be achieving the same experience per unit time of another player level, taking into account experience penalties. If two characters are running tier 11 content, we can compare how much one is getting versus how much the other should be getting in order to keep pace with the other.

We can say that if we're going a specific speed at a given level in a given tier of content, then we can compute how fast you'll move to a different level.

This does change slightly with a change in tier.

Now, you might look at that and wonder why higher tier content means that you're going slower. The reason is that we're calculating independent of how much XP each individual Map would give, we're only concerned with the tier, and we're telling it that we're getting a given amount of XP at level 96 in that tier. The XP Multiplier drops off slightly differently between different tiers, and bottoms out much more quickly at lower tiers. This is where changes in map type for efficiency come into play. If you can actually meet a given XP rate in a given tier of map, there is going to be a sweet spot in terms of which tier of maps you would actually want to run. In practical terms, people run maps for a given layout and density.

A hyperbolic example to explain why it's "faster" at lower tiers:

Another way to think of this discrepancy is due to XP efficiency between the different tiers. The XP multiplier at level 96 for Level 67 content is 1.03%, and for tier 11 content is 7.19%. This means you will generally be gaining 6.98 times as much XP doing tier 11 content as you will be gaining in Level 67 content. It is a bit difficult to actually state how much someone would be gaining, simply because you cannot do a direct comparison between the two. They are different monster levels and give different raw experience, but in general, it should be a good measuring-stick to tell that you would need to run about 7 times as many Level 67 zones as tier 11 maps in the same amount of time to get the same amount of experience. It doesn't quite work like that, but it should be close.

This also shows that the difference in XP multiplier governs how much you'll be gaining at a given level within a given tier of content. So notice that the level 67 zones bottom out at 1% XP Multiplier at level 97, 98, and 99. This means that if you are able to gain a given amount of XP at level 97, you will gain the same amount of XP at level 98 and 99. The XP Multiplier drops down to the minimums much more quickly (or degrades more slowly) for lower level content due to the way the XP Multiplier formula works. So this means that you are not slowing down as much in terms of XP gains when you increase in level. This also means that we should be able to find a theoretical sweet spot for Map tier versus XP gained through empirical tests. Because it is clear that it takes much longer to get to level 100 while running level 67 content than it does while running tier 11 content.

Great! Now maybe we know that we just want to run tier 11 content from 80 to 100. How long will it take? We can re-arrange the formula from calculating the 96->100 values to insert an X for the amount we gain per hour:

That means we take the sum of our XP amounts per level multiplied by the ratio of XP multipliers between the levels being compared:

We can see that this is actually a very simple formula when we pre-compute most of it, and we'll end up with just a single division operation. We can therefore generate a table for tier 11 content, showing the Numerator of the division operation (expressed in Millions of XP), so that we can quickly compute how long it will take to go from one level to a different level. It is also important to note, that for most tiers, these values will not change much, and particularly for tiers near to 11 (such as tiers 8-13), this table should be close enough to get a very accurate estimate of the time it will take. Note the numerator for 80->100 in the table is slightly different from the value calculated above, because above just rounded the XP from one level to the next, and the table uses the exact values.

To use this table, find your level in the left-hand column, and then the level you would like to reach on the top row. Where they intersect gives you a "Raw XP" value (in Millions), which you can divide by your XP/hour, to see how long it'll take to get from one level to the next. You can also subtract out the XP you've gained in your current level (in Millions) from the value, and divide, in order to get a better estimate.

Party play experience has witnessed a revision since its first incarnation in the game. In the original system, a monster with a solo experience of 1000 would instead have PartySize * 1000 experience, which would then get split among the party members proportional to (PlayerLevel+10)^2.71. However, this system promoted lower level players boosting higher level players. To remedy this, in Patch 0.9.13e they instead took these experience values that players would get and capped them at the solo experience of the monster. This means characters can get penalized for being lower level relative to the party, but not rewarded for being higher level (both compared to solo play).[5][6][7]

All other experience penalties and multipliers apply in addition to this party penalty.

The following formula captures the revised system, which caps out the multiplier at 1, while keeping the same effect for players who would be penalized.

In the following example a party containing a level 10 and 30 player kill a monster which gives 1000 solo experience: Percentual Old Share of experience:

The table below shows the players "share" from level 1 to 100.

Killing monsters that were raised from the dead by any means (revived by Necromancers, Soul Conduit Nemesis Mod, the reviving Strongbox affix) gives no additional experience. Player-summoned minions and monsters spawned by other monsters (ex:sirens) also award no experience. Beyond demons, and monsters from Strongboxes do give experience, however.