From Path of Exile Wiki
Revision as of 15:25, 4 January 2023 by Vinifera7 (talk | contribs) (→‎Atlas Completion Bonus: Template:Tip is verboten in the article namespace.)
(diff) ← Older revision | Latest revision (diff) | Newer revision → (diff)
Jump to navigation Jump to search
This page is about the game mechanic. For other uses, see Atlas of Worlds (disambiguation). 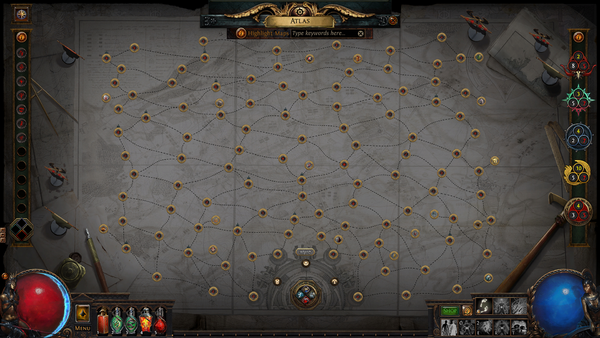 The Atlas of Worlds fully completed with all Voidstones (3.17)

The Atlas of Worlds is Path of Exile's end-game map system. The Atlas is a series of linked maps that players can progress through after completing a quest for Commander Kirac. It is explored and discovered by running maps within the Map Device at the Karui Shores, a player's hideout, or a guild hideout.

The Atlas of Worlds is a visualization of the dream worlds that are opened by activating maps, indicating how these worlds are linked. The Atlas is comprised of 115 different maps connected to each other by paths.

To "run" a map, the player must normally place a consumable map item in the Map Device. This creates a new instance of that map. The map will contain monsters and treasures and one or more unique bosses. To successfully complete the map, the character(s) must defeat all of the unique bosses on that map.

Maps are divided into three colours based on their tiers:

At first, your access to the maps of the Atlas is very limited. When map items begin dropping in Act 8, they will only be for the four starting maps at the very bottom of the Atlas, the "tier 1" maps. All the other maps on the Atlas with "tier 2" or higher start out locked.

To unlock a map, the player must successfully complete that map at least once by beating the unique boss, either in a specific boss arena or roaming the map, depending on the map. Atlas progress is shared by all of a player's characters in a league. Once a map is unlocked, they can start dropping as loot.

In addition, there is an Atlas passive skill tree with perks that affect drops and improve various League mechanics features, such as Master missions and Extra Content, and Harbinger, etc. Atlas passive skill points can be earned by completing maps' bonus completion or Maven's invitations.

The Atlas has many end-game bosses that players can fight, such as The Searing Exarch, The Eater of Worlds and The Maven which requires completion of the Maven's challenges in The Maven's Crucible. Other bosses like Uber Elder and Sirus, Awakener of Worlds can be fought repeatedly by using a special set of 4 map fragments in the Map Device. 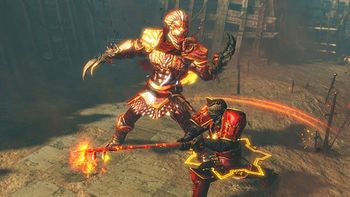 A player fighting Chimera; one of the Shaper's guardians

Map drops are not entirely random; instead, a specific tier is chosen first, and the map type is chosen from a pool of available maps for that tier or connected to the map the character is currently in.[1]

Only unlocked maps -- maps that the player has completed at least once in that league -- can normally drop as random map items. If a character is currently in a map instance, then map items for that map, and for maps directly connected to that map by a path on the Atlas can randomly drop whether they are unlocked or not.

A character can receive map items through means other than random drops. Map items -- even for maps that are still locked in the Atlas -- can be purchased from Kirac or other players. Completing a map through any of these means unlocking the map.

In addition, successfully completing a "legacy map" -- a map item from a previous version of the Atlas -- not only unlocks that map in the current Atlas, but unlocks all maps with a tier that is the same as or lower than the legacy map's tier. This can allow a new Standard league player or a player entering a new league to rapidly unlock maps that would not be accessible through random item drops.

When a map drop's tier is rolled and no maps of that tier currently exist on the atlas, a map isn't dropped but instead adds to a "Map Equity" system that helps higher tier maps to drop.[2][confirmation needed because of 3.10 change]

Each Tier grants a different value of Equity that accumulates.

Map Equity checks possible map drops in descending order - by first checking if it's high enough to drop a Tier 16, then Tier 15, then Tier 14, so on and so forth.

Some maps are considered optional, either because they are special or because they have been removed from the Atlas entirely. Optional maps do not count towards completing the Atlas, and do not affect the various bonuses for doing so.

You gain completion bonus for each map in the Atlas map completed for the first time under certain conditions:

Pressing Alt while hovering over a map item shows whether the map completion bonus has been completed. This also works when selecting map missions from Commander Kirac.

This does not increase the amount of Maps that drop but makes it much more likely for your Favourite Map(s) to drop.

For example, if you have 20 T16 Maps completed and a single Map with a 120x multiplier on it, you'll have 19 Maps with a weight of 1, and your Favourite Map will have a weight of 120, making it much more likely to be chosen.

Using the Atlas keystone Singular Focus, the player can choose to only receive favoured maps. Alternatively Shadow Shaping can be used to stop favoured maps from dropping.

Once per day, when you log in, you will receive one Atlas mission for each master for the tier relative to the highest map tier you've completed in this League. Free Atlas missions refresh at midnight UTC.

Each time you complete a map, there is a 35% chance to receive an Atlas Mission for a random master. You can use Atlas Missions to guarantee a master to spawn in your next non-unique map. Your Atlas Mission counters are tracked for each set of map tier colours: white, yellow, and red; which one you receive is the same as the tier colour of the map you received it in.

Your accumulated number of Atlas Missions can be seen in the Atlas layout screen. There is no limit to how many Atlas Missions you can store. You can redeem an Atlas mission via the mission buttons in the map device interface or by speaking to a master then running the map from that screen.

Note that as only a single master can appear per map, using a master mission will prevent triggering other sources of master spawning, including the base 10% chance of triggering a random master per map. It is possible to slightly increase encountering a specific master by avoiding atlas missions for the other masters.

The Eater of Worlds, The Searing Exarch, The Maven, and Uber Elder each drop a Voidstone when first defeated. When a Voidstone is slotted into the Atlas, all maps on the Atlas drop with a higher map tier base and grants a +25% chance for dropped maps to be one tier higher.

Sextants are used on Voidstones to add a special modifier to all maps. Sextants last for 3 maps and can stack with other different sextant modifiers.[1]

They can be stored in an itemised form using a

When the current league ends the progress on the Atlas of Worlds is transferred to the relevant parent league. The parent league is generally Standard or Hardcore.

The merge has the following rules:[5]

A catch up mechanics was added to the Atlas since version 2.4.0.[6]

Since the Atlas shuffled every time at the start of new league and big patch (currently each time the game release the 3.X.0 patch). Using a T16 map (natural tier 16 map) from the legacy map series will unlock the completion of T1-15 maps. If it is a rare corrupted legacy map, it will also unlock all bonus Objective of the T1-15 map.