In Path of Exile: Scourge, you must fill the Blood Crucible with the blood of your enemies then shift into an alternate Wraeclast where an apocalyptic event rages, in order to slay powerful demons and craft potent items ...

After the Leagues ended, Scourge was not added to the core game.[2]. As of Version 3.19.0, Scourge monsters and tainted currency items can be found in Beyond encounters. 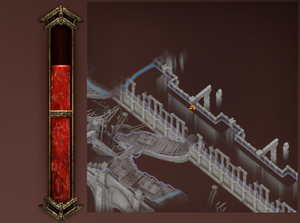 Starting from The Coast, The Last to Die will appear. The character will be asked to take the

and thus begin the exploration of a ruined land very familiar but very different.

The Blood Crucible is given to the character allowing them to begin their first journey into a fallen Wraeclast. Hordes of blood crazed creatures rush fervently desperate to consume, and follow their only thought; devour.

The killing of these monsters is only possible with the Blood Crucible. It is also capable of collecting corruption, which is the fuel for items placed inside it. Once a threshold has been reached, the item can be corrupted. Doing so gives an item one positive and one negative Scourge-specific implicit modifier. Items can be corrupted up to a third tier, offering rarer modifiers.

is used to collect corruption from killing Scourge monsters. Once enough is gathered, you can Scourge maps, uniques, standard bases, and jewellery items, and transform them up to three times for equipment and ten times for maps.

Killing Scourge monsters grants experience points towards the Crucible skill tree, which can enhance Scourge corruption outcomes, the accumulation rate of corruption for specific base types, and expand the functionality of The Blood Crucible.

Killing monsters gathered Corruption when in The Nightmare and continued to accumulate as the character moved through the map. However, the character was also afflicted by the "Exposed to Corruption" status effect that resets when moving from map to map, it had the following effect per stack:

These new icons were introduced to the minimap, one for each scourge boss:

Scourge monsters dropped corrupted currency items, which were used on the corrupted items generated through the Dream Furnace.

Unique boss enemies can spawn in the Nightmare realm. The boss encountered depends on the type of enemies in that map. When encountered, the Blood Gauge pauses for 5 seconds during the spawning animation, and every time the boss lost 5% of its life (refreshes each time; the time does not accumulate). Defeating a Scourge boss has a chance to drop a

, which granted a third equipment slot for the Crucible.

The Scourge leagues include 40 optional challenges. Completing them awards the following cosmetic items:

When you complete 12 challenges, you will receive the

. When you reach 24 challenges, you will receive the

. At 36 challenge completed you'll receive the

. These cosmetic items are only obtainable in this league.

All artwork below is the property of Grinding Gear Games and depicts original concepts also in their property. The original announcement in which the artwork is featured can be found on the official Path of Exile forum.[4]