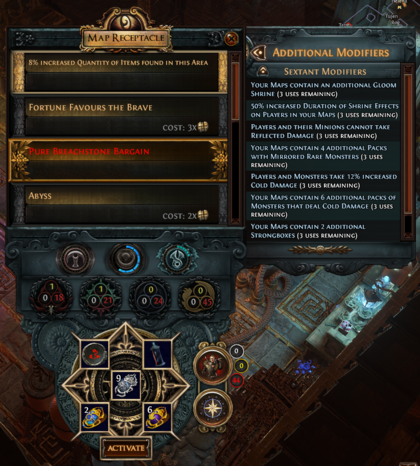 The Map Device is a world object that allows the player to access certain areas by placing items such as maps, map fragments, or other map-related items inside it.

In the Epilogue, players will gain access to a fully functional map device in the Karui Shores. After completing the mission

In order to activate the device, maps, one or more map fragments, and/or miscellaneous map items need to be placed inside the Map Receptacle. Generally, only one item is required, but for certain map fragments the player may be required to arrange the fragments in a certain order (typically as keys to an endgame boss).

It is also possible to place other map-related items alongside a map for bonuses:

By default, the map device has 4 items slots. A fifth slot can be unlocked by completing the Domain of Timeless Conflict with four Timeless Emblems, as shown in the Atlas quick guide.

The map device can also add one of several different modifiers to map areas, including a boost to item quantity up to 8% as you complete maps (the default), guaranteed previous challenge league encounters for the price of a couple

s (also known as Kirac mods, unlocked as your complete maps), or rarely other mechanics such as Monstrous Treasure through the use of several Atlas passive skills. It also adds the ability to add a Master mission to a map.

Later on, upgrades to the map device may be used to complete the Atlas questlines, and eventually advance progress with the Maven or the Eldritch Horrors mechanics by Maven witnessing the Map Boss or adding Eldritch influence to your maps respectively.

Six portals to the map area are opened when the Map Device is activated. Each portal can only be used once.

The first use of each modifier is free, and additional free uses may be obtained via Shaping the Mountains.

These items can be used on a Map Device to open an instance to an area. They are classified as Map Fragments by item class.

These items can be used on a Map Device to open an instance to an area. They are classified as Misc Map Items by item class.

s cannot be opened using the map device, and instead must be opened through Dannig.

Players encountered 2 Map Devices in throughout the Act 1 to 10. The Ancient Reverie Device in The Chamber of Sins Level 1, which was repaired before Act 7 and allowed the player character to use

during Act 7. The device is disabled afterwards[1] for reason outside the in-game lore (the dev disabled that device to prevent multi-boxing of map instances). The player also encountered another map device in the Eternal Laboratory subarea of The Solaris Temple Level 2. That map device (known as the Reverie Device) was made by Malachai and seems a copy of the device in the Chamber of Sins. That map device was also functional (in Merciless difficulty only) until version 3.0.0, which the dev disabled it to make way for the device in The Templar Laboratory.

A third device was located in The Templar Laboratory which is made by Valdo Caeserius. However, this part of the story and area despite still assumed to be canon, it is not in-game anymore. This map device was exploded at the very first quest of Conquerors of the Atlas's epilogue. The map device in The Templar Laboratory was functional from version 3.0 until 3.9 but the dev decided that only hideout is the place to map.

In previous expansions, Conquerors of the Atlas and Echoes of the Atlas (version 3.9.0 to 3.16.X), player made the fourth device from spare part as part of

Picking Up the Pieces quest; In pre-version 3.9.0 timeline, a personal Map Device was given by Zana so that the player can either mapping in hideout or in The Templar Laboratory.

The fifth device was seen during Sirus boss fight, which is located on the Cathedral rooftop (same rooftop as The Cathedral Rooftop (Act 10)). In that instance of area, the map device at the Templar Laboratory was repaired so that the player character can travel though the portals from Cathedral rooftop to the Templar Laboratory in order to chase Sirus. (All these areas are grouped into 1 map frag only map known as Eye of the Storm.) Despite the Sirus boss fight is still accessible in-game, the boss encounter is considered an interactable "memory" that generated by the power of the Atlas.

Finally, in the current expansion, Siege of the Atlas, in post-version 3.17's Karui Shores, there is 3 Map Devices in the main room (despite only 1 is interactable by the player), and according to Commander Kirac, they (Citizen Vanguard), have secured at least 3 map devices. More decoration that similar to personal Map Device, can be seen in the Kirac's Vault subarea of the Karui Shores. The player also uses their own map device in the hideout. The dev also changed the coding of the game so that in either Karui Shores or hideout, the area would opens the same number of portals to the currently opened map (or map like items) so that there is no chance of multi-boxing of maps. It is not certain that those 3 devices are the devices from the aforementioned The Chamber of Sins, the Eternal Laboratory, the Templar Laboratory and The Cathedral Rooftop, or yet another 3 map devices from other areas, as Kirac's dialogue did not disclosed the details.

It is not directly seen by the player, but when opening a map that contains Smuggler's Cache as part of Kirac's Atlas mission, he claimed that the smugglers (or in his own word: "criminals") may possessed their own map device.