League Mechanics are a set of challenge league features which were reworked and permanently added to the game after their respective league finished. Each represent a powerful way to obtain crafting material, item drops, or augment items. They are named after the league in which they first appeared and are sometimes referenced by that name in game.

Most are considered Extra Content and their chance to be encountered in maps can be positively modified. Many can be eliminated entirely.

Abysses are interactable objects which spawns cracks and pits that spawn monsters. Abysses are marked on the minimap with a green icon .

Strongboxes are a special type of loot container. When opened, a strongbox will release groups of monsters to surround and attack the character.

Rogue Exiles are rare monsters with player skins which use players skills. On death, exiles drop a large amount of items, including one for each inventory slot.

Beasts are marked on the minimap with a yellow icon or red icon and can be hunted with Einhar Frey. Captured beasts can be interacted with in The Menagerie for crafting effects.

The Immortal Syndicate have three encounters on a map. Syndicate members are marked on the minimap and may be guarding a transport , fortification or research . They may also appear out of portals and attempt to assassinate the character.

Defeating the syndicate members will provide intelligence in the investigation which is coordinated with Jun Ortoi. Once intelligence in a faction reaches 100%, the player can raid their safehouse for significant rewards based on the leader and rank of the safehouse members. Sufficient safehouse encounters will result in a boss fight against the Syndicate Mastermind.

Blights are tower defense-like encounters that can spawn from Fungal Growths in any map area, which will always be accompanied by Sister Cassia. Blight encounters are also found in Blighted maps that have all the monsters removed saved for a single special Blight encounter.

Breaches are timed monster-spawning portals identified by a red hand-like construct within a purple circle . Walking into the hand will activate the breach. 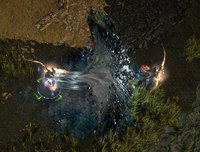 A Delirium mirror spawns on a map.

A Mirror of Delirium is a glittering black gateway which spawn within a close distance from the zone entrance. Once a player passes through it, it spawns a gray mist that spreads outwards throughout the map, beginning the Delirium encounter. Delirium is a zone-wide effect that spawns new enemies and empowers existing ones. As the player kill enemies inside the mist, a reward bar on the bottom left will start filling up. Delirium encounters only last a short period of time.

Voltaxic Sulphite appears on the minimap as a golden yellow mineral and can be mined with Niko, Master of the Depths. It provides fuel to explore the Azurite Mine which is one of the End Game activities.

Shrines can appear randomly in most areas, granting significant bonuses to nearby monsters or casts spells at nearby players, and are often guarded by monsters. Players can steal the shrine to temporarily gain its bonuses.

The player will encounter one of the four Expedition NPCs. The player can place explosives in the area to unearth monsters and chests. An Expedition logbook can drop and be taken to Dannig, open portals to larger Expedition areas with more remnants, flags and placeable explosives. 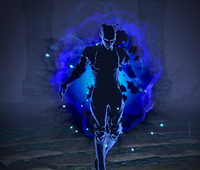 A Harbinger is a blue glowing monster named with strange runes. They can only be harmed by killing their minions and mainly drop currency shards.

A portal to the The Sacred Grove contains seeds which may be activated to spawn monsters. Defeating these monsters provides access to various Harvest crafting options.

A Smuggler's Cache is a type of loot container that contain contracts,

, and a quest contract. These can be used in The Rogue Harbour which is one of the End Game activities.

A Temporal incursion is a short-duration visit to a temple room. Defeating one of two Vaal Architect in the incursion or using a

will customize and upgrade The Temple of Atzoatl. After all incursions are finished, a map of the Temple may be opened.

Legions are ancient armies frozen in the midst of battle. They can be encountered by touching a Timeless Monolith , which spawns the Legions and gives the player a window of time in which they can be "killed". Once the timer ends, "killed" mobs are broken out and can fought for rewards.

Monster organ sample may drop from monsters marked with a green "arrow" on their bodies and marked on the mini-map with a circular green icon . These can be combined to create a powerful boss monster Metamorph. 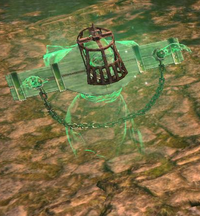 A Tormented Spirit is a green spirits which flee when encountered and imbue nearby monsters with dangerous powers, which improves their item drops.

Warbands are 5 factions of unique monsters that randomly spawn in map. They also occupied 5 maps as map bosses, or specific nodes in the Azurite Mine. They can be encountered as random map content during flashback event (if the dev chose Warband as one of the random area mod), or crafted to map if it is offered by Kirac. There is no atlas passive skill directly associated to Warband.