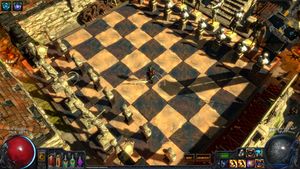 An example of a hideout.

A hideout is a special area players can design for themselves. Hideouts can first be unlocked after freeing Helena in Act 2, who will let you change hideouts and help find new ones. Players can invite certain NPCs, including masters, Helena, Kirac, Sister Cassia, Tane and Expedition league NPCs to their hideout. Players can also decorate their hideout with decorations.

Hideouts can be visited using the /hideout command while in town, or from any waypoint. The waypoint for the hideout is found in the bottom right corner of the map, but only appears for players when they are at a waypoint.

When first finding a hideout, it must be fully cleared of all monsters in it. Afterwards, the hideout is unlocked. Players that enter the area after the monsters in the hideout have been cleared can talk to Helena in order to unlock it. Hideouts can be found throughout the acts and in maps. The chance of generating a hideout in an area depends on its rarity tier. 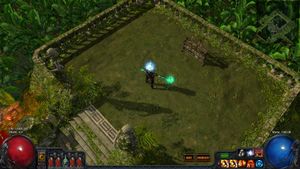 A nearly empty Overgrown Hideout, without any decorations.

Hover over the "i"-button in the Editing-Menu to get the following instructions.

Players can visit someone else's hideout by right clicking on the desired player's name and choosing "Visit Hideout".

It's possible to control who can do this via tickboxes at the bottom of the hideout stash. Players can separately allow or disallow friends, guild members, or party members.

Visitors can sell at masters, but cannot buy, and cannot use any crafting benches.

A Guild hideout is an special area for the guild members. Guild Hideouts feature a Map Device and Crafting Bench that can be used by all Guild Members. When in a party with fellow Guild Members, the party can all access the party leader's Map Portals from the Guild Hideout.