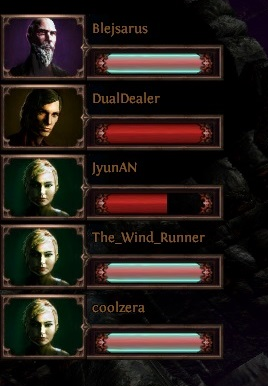 Members of the party are shown on the left.

Parties allow up to six people to play together. Players can create or join public parties by clicking on the Notice Board in town, or by pressing S to open the Social window. Players can also invite someone to a party by selecting a player's name in chat, clicking on them in town, or typing /invite playername in the chat console. 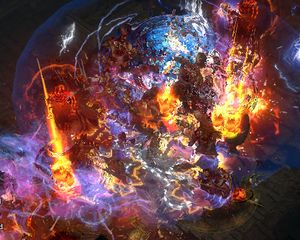 Partying has its drawbacks affecting the visibility of enemies

Monsters gain extra life for each additional party member after the first:

The original life amount is used for the purposes of determining the length of stuns and status ailments – this means monsters will not be harder to stun/freeze/etc when fighting in a party.

It is believed that monster's extra life gain is only affecting nearby ones, therefore players leaving map before new monsters are encountered have no effect on their life.

Each player after the first adds the following bonus:

Item drops from monsters are calculated based on the number of players nearby (13 metres - around six tiles, which is approximately a screen) rather than the number in the instance. The quantity of drops is based on the minimum of the number of players who were around at the start and end of the fight. This means that if you spawn a boss alone before bringing in friends to help (or if the friends leave during the fight) then it will only drop enough items for one person.[2]

The chance of a non-unique Map dropping is not affected by party size.[3] They are affected by the quantity and rarity bonuses provided by the Map they are dropped inside of.

Unique maps are dropped as part of the normal Item drop system and not governed by the same rules as other non-unique maps so they do get the party bonus.

Party members of a character landing the killing blow on an enemy will gain flask charges if they are nearby.[4] This is not true for all +life and +mana gained "when you deal a killing blow" modifiers; only a character actually landing a killing blow will trigger those effects.

Parties allow players to share all benefits of buffs that apply to allies and all debuffs to monsters. Some examples include:

When partying with characters, downsides can happen that a solo player would not have to encounter. Some of these challenges are temporary and can be worked around. Some problems like lag may be permanent for some players. These examples will focus mainly on problems that may occur with a party with strangers.