Additional Effects per 1% Quality:
1% increased Skill Effect DurationPlace into an item socket of the right colour to gain this skill. Right click to remove from a socket. 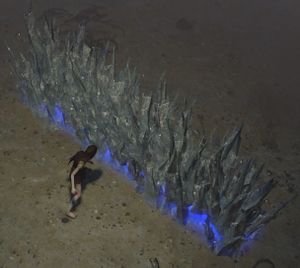 Frost Wall is a spell that creates a impassable wall of ice which damages enemies and pushes them back.

Frost Wall can be created from the following recipes: