Conversion TrapTrap, Spell, Duration
Level: (1-20)
Cost: (6-23) Mana
Cooldown Time: 8.00 sec
Can Store 3 Use(s)
Cast Time: 1.00 secThrows a trap that, when triggered by an enemy, converts that enemy to your side for a short duration. Does not affect unique monsters or players.Per 1% Quality:1Superior2Anomalous3Divergent1% increased Skill Effect DurationConverted Enemies have 1% chance to Taunt on HitConverted Enemies deal 20% increased DamageTrap lasts 4 seconds
Base duration is (5.3-10) seconds
Traps do not Trigger at the end of their DurationPlace into an item socket of the right colour to gain this skill. Right click to remove from a socket. 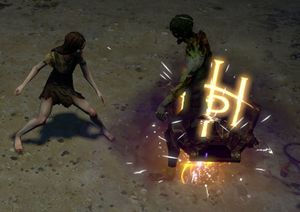 Conversion Trap throws a trap that causes the enemy that triggered it to temporarily ally with the user.

Normal (white named), magical (blue named) and rare (yellow named) Monsters can be made into allies using this skill, but unique and boss (orange named) monsters cannot. Magical and rare monsters that are dominated will keep all special attributes, including Auras which will be applied to the player and all allies.

Hostile Totems can be turned into allies using Conversion Trap. Auras from the totem will affect the player and a Shockwave Totem will attack the player's enemies.

Temporary Allies: Monsters turned by Conversion Trap are not counted as minions for the purposes of minion-specific passives and support gems. Affected monsters also keep all debuffs and effects that were present before conversion.

In PvP or duels Conversion Trap can not affect players, however minions can be converted.[1]

Conversion Trap can be created from the following recipes: