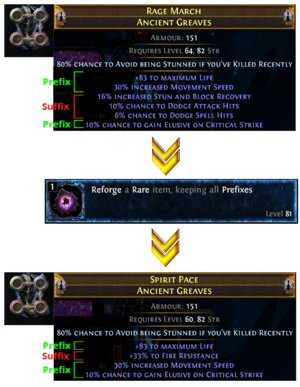 Infographic showing the result of Horticrafting an item using the "Reforge an item keeping all prefixes" craft.

Harvest Crafting or Horticrafting refers to creating or improving items by utilizing harvested modifiers, or "crafts". It was introduced in the Harvest league and added to the core game in the Echoes of the Atlas expansion. Players can explore maps to find entrances to the The Sacred Grove. Monsters in the Sacred Grove drop Crystallized Lifeforce which are used for Harvest crafting recipes using the Horticrafting Station.

These crafts allow players to create greatly improved rare items, because they allow greater control over the modification process verses using orbs, or exchanging currency or fragment items for different ones.

To learn which tag a given modifier falls under, roll-over an item while pressing the Alt key. You will see the modifier tags above the modifier. Eg. "Adds # to # Cold Damage" falls under the groups of Attack, Cold, Elemental and Damage.

A partial listing of modifiers that fall within the modifier tags are given as follows: