Divine OrbStack Size: 10Randomises the numeric values of the random modifiers on an itemRight click this item then left click a magic, rare or unique item to apply it.
Shift click to unstack. 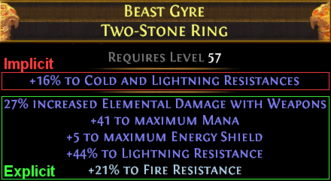 A Divine Orb is a currency item that can be used to re-roll the values of all random explicit modifiers on a piece of equipment. It is one of the three orbs most commonly used as currency to exchange items between players, the other two being

s (much lower value) and

Divine Orbs are extremely rare currency items that can be dropped by slain monsters, chests, and destructible containers. They also drop from Arcanist's Strongboxes .

According to the devs, it has the same drop rate as

.[1] However, unlike Exalted Orb which has vendor recipe (

), there is no vendor recipe for Divine Orb. (Note that selling a

to NPC, is a downgrade recipe)

Divine Orb can be created from the following recipes:

Divine Orbs re-roll the values of explicit values of modifiers. This can only be used on magic, rare, or unique items. Only the values of affixes that have a range of values will be randomized. A Divine Orb will not change the tier of the affix; it will only re-roll within its current tier.

If a new modifier was added to a unique item, the new modifier will not spawn by using a Divine Orb. Despite this has some exception such as

WillowgiftWillowgift
Jade AmuletRequires Level 52+(20-30) to Dexterity10% reduced Strength
15% increased Dexterity
-(30-20)% to Fire Resistance
+(30-40)% to Cold Resistance
You do not inherently take less Damage for having Fortification
+4% chance to Suppress Spell Damage per Fortification
(15-25)% increased Attack and Cast Speed while at maximum FortificationThe storm cannot break that which bends.

The Coward's TrialThe Coward's Trial
Cursed Crypt MapMap Level: 82
Map Tier: 15
Guild Character: ÅContains waves of Monsters
Contains additional waves of Undead Monsters
<0 to 7 random additional waves modifiers>For his sins he was hunted in his sleep,
judgement wrought of twisted nightmare.
The Coward bound his dreams to stone, awaiting
another to walk the path of true atonement.Travel to this Map by using it in a personal Map Device. Maps can only be used once.

which existing mods became hybrid mods. The dev added the new "mod" as extra sentence in the existing mod.

In cases where a modifier was removed, the affix will become disabled with a hidden value of zero.[3] This also means that magic or rare items will have a hidden mod that will prevent new mods from being crafted.[4]

A Divine Orb does not change a unique item's Style Variant (for example, Doryani's Invitation). Certain item ranges also may be undivinable, making them distinct variants.

Usually the divinable and undivinable mod values can be viewed by pressing Alt in PC (it has different keybind in controller mode) to open the adv mod viewer.

Divine Orbs can also be used to create

s, though currently this is highly unprofitable.

Divine Orbs are high-value currency that play a crucial role in the in-game economy. Because of this, it is regarded as the "gold standard" currency for trading high-value items between players, including chase items like the

HeadhunterHeadhunter
Leather BeltRequires Level 40+(25-40) to maximum Life+(40-55) to Strength
+(40-55) to Dexterity
+(50-60) to maximum Life
(20-30)% increased Damage with Hits against Rare monsters
When you Kill a Rare monster, you gain its Modifiers for 60 seconds"A man's soul rules from a cavern of bone, learns and
judges through flesh-born windows. The heart is meat.
The head is where the Man is."
- Lavianga, Advisor to Kaom

For powerful or wealthy players looking to use Divine Orbs on powerful items, there are two primary methods to consume them. The first is through direct use of the orb, rerolling the values of an item's modifiers. This use is generally more valuable on certain unique items with a large range in modifier values or randomized mods than on rare items. Unique items where only one of the modifier values is more important than any of its other mods like

's +(1-5)% to all maximum Elemental Resistances or the

, but whether buying an item with high values from the market directly or rerolling the values of an item with low values is more economic depends on the item's general value.

Their other purpose is to add meta-crafting mods through Crafting Bench by paying a fixed amount of Divine Orbs. This allows crafters to safely preserve targeted modifiers on items, or block certain mods from being rolled when they add or change affixes. It also can be used to allow an item to have multiple crafted mods, a safer way of creating a very powerful - albeit not top-tier - item if it already has a few powerful affixes.