Additional Effects per 1% Quality:
1% chance to Shock enemiesPlace into an item socket of the right colour to gain this skill. Right click to remove from a socket. 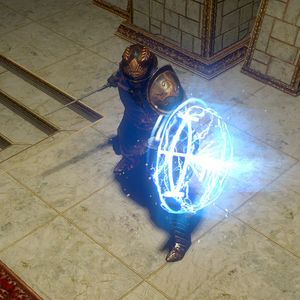 Tempest Shield is a spell that reserves mana to empower your shield, granting spell block chance and immunity to shock. While active, whenever you block, you deal damage to the enemy that hit you with an arc of lightning that chains to nearby enemies.

Damage on Blocking: This spell will damage the attacker whenever you successfully block any direct attack or spell.

Chaining: The damage on block chains from the attacker to the nearest enemy in a range. The number of times the lightning damage chains can be increased by supporting Tempest Shield with

Additional Effects per 1% Quality:
Supported Skills have 0.5% increased Chaining rangeThis is a Support Gem. It does not grant a bonus to your character, but to skills in sockets connected to it. Place into an item socket connected to a socket containing the Active Skill Gem you wish to augment. Right click to remove from a socket.

or equipping a helmet with an Tempest Shield chains an additional x times enchantment.

Necromantic Aegis does not cause Tempest Shield to be applied to Minions. The block chance will be lost and Tempest Shield can no longer deal damage because you are not using a shield.[1]

Tempest Shield can be created from the following recipes:

The symbol that appears on the character's shield when Tempest Shield is used is a Descry.