Ground SlamAttack, AoE, Slam, Melee
Level: (1-20)
Cost: 6 Mana
Attack Speed: 90% of base
Attack Damage: (115-188)% of base
Effectiveness of Added Damage: (115-188)%
Radius: 35Slams the ground in front of you, creating a wave that travels forward and damages enemies with an increased chance to stun. The wave deals more damage to closer enemies. Requires an Axe, Mace, Sceptre, Staff or Unarmed.Per 1% Quality:1Superior2Anomalous3Divergent1% increased Stun Duration on enemies
0.5% increased Area of Effect0.5% increased Attack Speed2% increased angle25% reduced Enemy Stun Threshold
Deals up to (40-49)% more Damage to closer targets
+(0-10) to radiusPlace into an item socket of the right colour to gain this skill. Right click to remove from a socket. 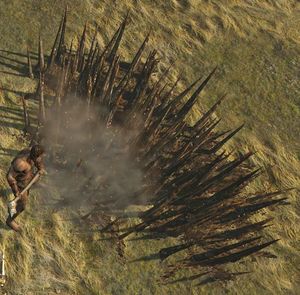 Ground Slam is a melee attack creating a wave that travels forwards and damages enemies with an increased chance to stun.

Ground Slam can be created from the following recipes: