From Path of Exile Wiki
Jump to navigation Jump to search
PunctureAttack, Projectile, Duration, Melee, Strike, Physical, Bow
Level: (1-20)
Cost: 6 Mana
Attack Speed: 70% of base
Attack Damage: (134-164)% of base
Effectiveness of Added Damage: (135-165)%Punctures enemies, causing a bleeding debuff, which will be affected by modifiers to skill duration. Puncture works with bows, daggers, claws or swords.Per 1% Quality:1Superior2Anomalous3Divergent4PhantasmalBleeding inflicted by this Skill deals Damage 0.5% fasterProjectiles Pierce 0.1 additional TargetsMelee Strikes target 0.1 additional nearby Enemies0.5% chance to Maim on HitDeals (134.74-164.56)% of Base Attack Damage
Base duration is 8 seconds
(3-75) to (4-113) Added Attack Physical Damage
(30-49)% more Damage with Bleeding
Causes Bleeding
+(0-2) to Melee Strike RangePlace into an item socket of the right colour to gain this skill. Right click to remove from a socket. 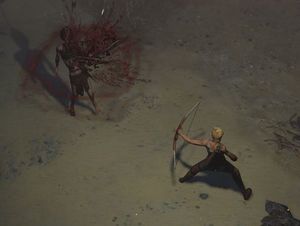 Puncture is an attack skill that applies the Bleed ailment to enemies it hits, causing them to take physical damage over time that increases while the target is moving. Bleed applied with this skill deals more damage than usual.

Unlike other sources of bleed, Puncture's bleed ailment lasts 8 seconds and is affected by % increased Skill Effect Duration modifier, including the

For mechanics of the bleed effect itself, see Bleed.

This item can be acquired through the following upgrade paths or vendor recipes:

This item is used by upgrade paths or vendor recipes to create the following items: