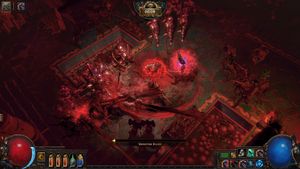 A temporal incursion is a short-duration visit to the past wherein two Vaal architects are vying for control of a room within the Temple of Atzoatl. The objective is to murder one of the architects so that the other can prevail, thereby altering the Temple in the present time. This encounter is considered Extra Content and has a baseline 8% chance to appear in any non-unique map area.

After completing No Time like the Present, Alva Valai will have a chance to spawn in most zones, allowing the player to enter three Incursions - There will be three seperate entrance points throughout any map she spawns in. She does not spawn in side areas or if the zone is more than 10 levels lower than the level of the player.[1] Alva can also appear in maps. You can guarantee Alva to spawn by using an Atlas Mission.

Each time players encounter Alva Valai in the wilderness, she can open a time portal, allowing a visit to an incursion room in the ancient Vaal Temple of Atzoatl during its construction.

During the Incursion League, she would appear in almost every zone, but would only allow access to one Incursion per zone as opposed to the current three.

Players have a short time, initially 10 seconds, to spend in each temporal incursion. During this time, they can (in descending order of priority):

Notes: You cannot get the same incursion room more than once in one zone. To maximize the chances of fully upgrading a specific room, you will have to run multiple incursions over extra encounters.

After 12 incursions, the completed Temple of Atzoatl dungeon can be entered and looted. Which rooms are accessible and what they contain depends on the player's actions during the incursions.

Chronicle of AtzoatlChronicle of Atzoatl"Grand plans were laid for a place called Atzoatl, though fierce bickering between its Architects is said to have stifled its development." - Icius Perandus, Antiquities Collection, Research ReportCan be used in a personal Map Device to open portals to the Temple of Atzoatl in the present day.

, which can be used to open an instance to that Temple of Atzoatl using a map device. You must be able to access a map device to use this function.