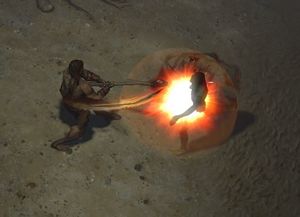 Heavy Strike is an melee strike attack skill that hits and knocks back an enemy, using a mace, axe, sword or any two-handed weapon. Each hit has a chance to deal double damage.

Heavy Strike can be created from the following recipes:

In addition, Heavy Strike is the starting skill gem for Marauder. It drops after killing the first monster of the game, Hungry Corpse.