Storm CallSpell, AoE, Duration, Lightning
Level: (1-20)
Cost: (6-16) Mana
Cast Time: 0.50 sec
Critical Strike Chance: 6.00%
Effectiveness of Added Damage: 250%Requires Level 12Sets a marker at a location. After a short duration, lightning strikes the marker, dealing damage around it. When this happens, it will also set off the lightning at any other markers you've cast.Deals (21-949) to (39-1762) Lightning Damage
Base duration is 1.5 seconds
+(0-6) to radius
(10-29)% increased Effect of Lightning Ailments 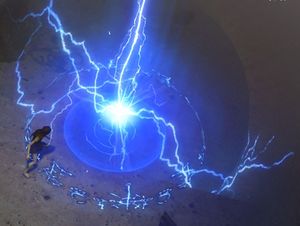 Storm Call is a spell skill which sets a marker at a location. After a short duration, the marker and all other other placed markers are struck by a bolt of lightning which deals damage in an area.

Duration: Increases and reduction to duration will affect the wait time between placing a marker and the lightning strike.

Additional Effects per 1% Quality:
Supported Skills have 0.5% less Skill Effect DurationThis is a Support Gem. It does not grant a bonus to your character, but to skills in sockets connected to it. Place into an item socket connected to a socket containing the Active Skill Gem you wish to augment. Right click to remove from a socket.

will therefore greatly reduce the delay between casting the skill and dealing damage.

Storm Call can be created from the following recipes: