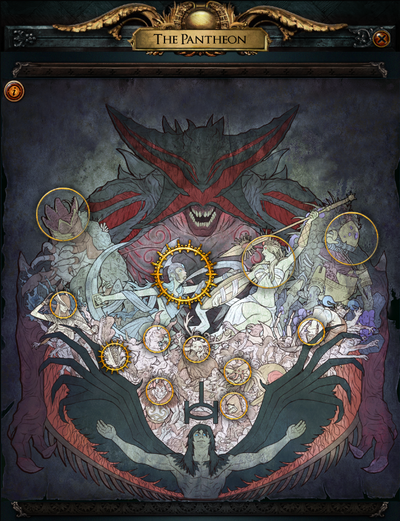 The completed Pantheon screen, showing Soul of Lunaris and Soul of Yugul active.

The Pantheon is a system of divine powers that players can activate to grant various defensive passive buffs, introduced in the The Fall of Oriath expansion. These powers grant defensive bonuses and become available when players defeat certain gods in Acts 6 through 10.

There are twelve gods that each grant a power; four major gods and eight minor gods. A player can only have one major and one minor power activated at a time. The bonuses can be freely swapped with no extra cost, as long as the player is in a town or hideout.

and any map, with a boss that can upgrade a pantheon power. Once this is done players will simultaneously get the baseline god buff as well as the secondary buff(s).

The Pantheon is not available in Ruthless mode.

In order to upgrade a major or minor god power, players need to:

Dialogue with Sin promptly after killing the deities. (Not in town)

The Azmeri believed that, one day, this world of ours would collapse under the weight of Rylatha's offspring. A frightening thought, and thankfully, a mistaken one.

Sin: Release this land to the will of its true children.

A mother's keen heart shall bleed into the dreams of her daughter. Once a beauty who held captive the hearts of men and women alike, Shakari's splendour decayed into lust...for the power possessed by her skyborn mother.

My daughter once sought out such power within the great sands of this desert. Ever determined, she found it, and it made her the twisted creature you so mercifully dispatched.

Driven by agony and shame, she built an army out here in these sweltering lands and would have conquered the very sky had not the Beast soothed her into peaceful oblivion. A babe once more sleeping in her cradle.

Sin: Rest, my child. Be free from the torments of immortality.