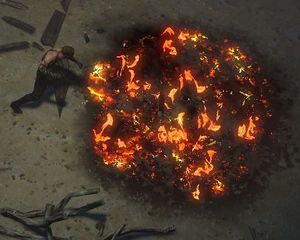 Fire Trap throws a trap that explodes when triggered, leaving an area of burning ground that damages enemies who walk through it.

Burning Ground Effect: The burning area left behind after a Fire Trap explosion does not act like other burning damage. It will do fire-based health degeneration damage simultaneously with other burning damage for as long as an enemy is within the radius of the Fire Trap. Once an enemy leaves the area, they will stop taking damage from Fire Trap. Trap, fire, area, spell and elemental damage passives will increase the damage of both the initial explosion and the damage over time. Burning damage passives will only increase the DoT.

Duration: Skill duration passives and the

Fire Trap can be created from the following recipes: