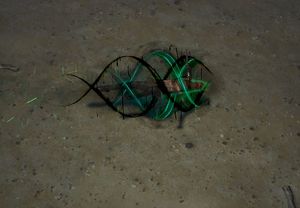 Whirling Blades is an attack skill. The player dives in a target direction, dealing damage to enemies they pass through.

Movement: Whirling Blades is a movement skill that makes the player move in a straight path in the targeted direction, passing through any enemies and dealing damage to them, after which there is a brief recovery period during which the player cannot move or perform any actions. Enemies cannot be hit more than once with the same skill use. Whirling Blades has both a minimum distance, which can be achieved by aiming the cursor close to the player, and maximum distance, neither of which can be modified.

Use time: Both local and global attack speed modifiers, including the attack speed bonus for dual wielding, decrease Whirling Blades' use time accordingly. If the player uses Whirling Blades to move less than the maximum distance, or if the player collides with an object during the movement, the recovery period is shortened, such that the use time is less.

Dual wielding: While dual wielding, hits are dealt with either the main or off-hand weapon, chosen at random.

Venom Gyre: Caught returning projectiles from Venom Gyre spiral outwards when you use Whirling Blades and do not return.

Whirling Blades can be created from the following recipes: