SunderAttack, AoE, Slam, Melee
Level: (1-20)
Cost: 8 Mana
Attack Speed: 75% of base
Attack Damage: (175-275)% of base
Effectiveness of Added Damage: (175-275)%Requires Level 12Slams the ground, creating a slow wave of churning terrain that damages enemies in a sequence of areas in front of you. A number of enemies hit by the wave will release a shockwave, damaging other enemies around them. Using the skill again will stop the previous wave. Requires a Mace, Sceptre, Axe, Staff or Unarmed.Per 1% Quality:1Superior2Anomalous3Divergent4Phantasmal0.5% increased Area of EffectWave has 0.5% reduced delay between Areas1% increased Physical DamageShockwaves have 1% reduced Area of Effect
Wave has 1% increased Area of EffectShockwaves deal 40% less Damage
Wave gains +2 to radius with each Area in the Sequence
Wave Damages 5 Areas
Wave cannot stop before Damaging 2 Areas
Wave causes Shockwaves from up to 5 Enemies in each Area
(0-19)% more Area of Effect
Wave has (0-25)% reduced delay between AreasPlace into an item socket of the right colour to gain this skill. Right click to remove from a socket. 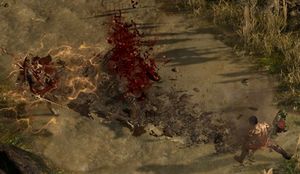 Sunder is a melee slam attack skill that creates a slow-moving area of effect wave forward. Enemies hit by the wave release circular shock waves that further damage nearby enemies. The wave continues to move past its minimum distance until a new wave is created. Requires an axe, mace, scepter, staff, or unarmed.

Sunder can be created from the following recipes: