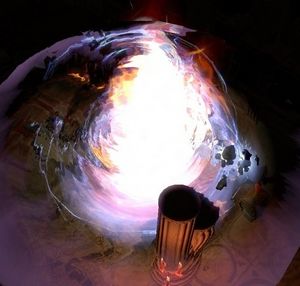 Discharge is a spell that consumes all of the player's charges (specifically frenzy charges, power charges and endurance charges) to deal elemental damage per charge consumed in an area around them.

Additional Effects per 1% Quality:
Supported Skills have 1% increased Critical Strike ChanceThis is a Support Gem. It does not grant a bonus to your character, but to skills in sockets connected to it. Place into an item socket connected to a socket containing the Active Skill Gem you wish to augment. Right click to remove from a socket.

gem gives a chance to gain only one power charge after every cast, regardless of the number of monsters hit.

Discharge can be created from the following recipes:

Discharge is used in the following recipes:

The following enchantments can only be found on legacy items in permanent leagues: No results found