Galvanic ArrowLightning, Attack, Projectile, AoE, Bow
Level: (1-20)
Cost: (6-10) Mana
Attack Damage: (80-99)% of base
Effectiveness of Added Damage: (80-99)%
Projectile Speed: 3260Releases arrows along with a burst of lightning which damages all enemies in a cone. The arrows degrade in-flight as the lightning dissipates, soon vanishing.50% of Physical Damage Converted to Lightning Damage
(1-9) to (5-179) Added Lightning Damage
Fires 2 additional Arrows
+(0-5) to radius
Increases and Reductions to Projectile Speed also apply to
this Skill's Area of Effect 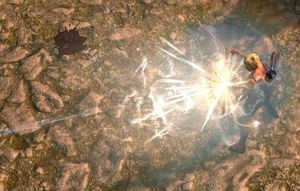 Galvanic Arrow is a ranged bow attack skill that fires arrows which deals lightning damage in an area of effect cone. The arrows have a short range, but it can be extended with increased projectile speed, which also increases the AoE.

Additional Effects per 1% Quality:
Supported Skills deal 0.5% increased Area DamageThis is a Support Gem. It does not grant a bonus to your character, but to skills in sockets connected to it. Place into an item socket connected to a socket containing the Active Skill Gem you wish to augment. Right click to remove from a socket.

) will affect the cone but not the arrow damage. The cone and arrow deal damage independent of each other, effectively doubling damage dealt to monsters directly in the line of fire.

Galvanic Arrow shoots a lightning cone each time you shoot your bow. Barrage Support makes your projectiles fire sequentially instead of simultaneously, meaning a lightning cone is triggered for each projectile shot during your attack.

Galvanic Arrow can be created from the following recipes: